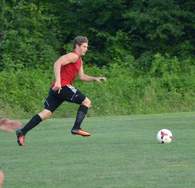 Check out video of me playing on my YouTube Channel at https://www.youtube.com/channel/UCPsZgiO2tlGcmZbFq1E5zmg

You can see many pre, regular, and post season highlights on my YouTube Channel at the above web address.

I am a 5 foot 10 inch 175 lb. junior(Class of 2019) at South Webster Jr/Sr High in South Webster, Ohio and have started as varsity offensive center midfielder as both a freshman (2015-16) and sophomore (2016-17). My coach has asked me to move to a Forward Striker position this year, and I have really enjoyed playing in that spot! I scored 27 goals with 4 assists for the season, which included 5 hat tricks! One of my hat trick videos can be viewed here: https://www.youtube.com/watch?v=j7x5Z-EqBBc&t=2s

My high school team the South Webster Jeeps finished in the Elite 8 in Ohio this year, so we were one of the top D3 Ohio High School Soccer Teams in the state for 2017-18!!! Our team was the second team in school history to make it this far. The Jeeps had not been to the Elite 8 since 2009.

The 2017-18 season was a successful one for both my team and for me. I was blessed to be chosen for the All Ohio Team, Conference Player of the Year in my conference,  and All District, too!

We had high success last year, too, and were ranked by CBS MaxPreps as high as 185th in the nation, 20th in the state of Ohio across all divisions, and 2nd in our own division four. Our team finished the 2016-17 season with an 18-1-1 record with our only loss coming in the Ohio Regional Semi Final to Bishop Rosecrans 1-0 in O/T Rosecrans went on to the Final 4 for the second consecutive year. It could have been us!. We were one of the top 16 teams in the state of Ohio in Divisions 3 and 4! It was a great season to be a Jeep!

I was blessed to start as a center mid-fielder in both my freshman (2015-16) and sophomore (2016-17) years. I was chosen 2nd team All Southern Ohio Conference (all county) in my freshman year and 1st team All Southern Ohio Conference (all county) this year as a sophomore. I was also named All District Honorable Mention in the East/Southeast District of Ohio which is made up of approximately 30 teams. My best match of the season was in the District Semi Finals in which I was blessed to be able to score two goals to help my team come from behind to win and advance to the District Final match, which we won as well. What a memory!

I prepared for this past 2017 season last winter and spring by attending many college ID camps. I attended nine camps in three of the off season months and have played in two college showcase tournaments in the last month.

I have a highlight video from every camp I have attended this winter on my YouTube Channel (https://www.youtube.com/channel/UCPsZgiO2tlGcmZbFq1E5zmg)

In addition to athletics, church plays a large role in my life. I have been raised in a Christian home and accepted Christ as my savior at the age of six. As a member of Grace Saturated Church in Wheelersburg, OH, I have participated in several ministry opportunities including an eleven day missions trip to Romania, playing drums for our church worship team, and helping lead the kids program.

Like many athletes, I participate in sports outside of my main game. I started our high school junior varsity basketball team as point guard and dressed varsity coming off the bench. My proudest basketball moment was being awarded the “Coaches' Award” by the varsity coaching staff. The “Coaches' Award” is given to one player out of both the junior varsity and varsity teams considered to have one of the best attitudes, hardest work ethics, and considered to be one of the most coach-able players. I was very proud to receive this award because basketball is not my main sport, and because I know that hard work, a good work ethic, listening, and a good attitude pay off. I sincerely have a desire to be this type of person and athlete.

One of my favorite sports for the 2015-16 year was track. I never ran junior high track, but I would have if I would have known how much I would enjoy the sport. In my first year of track as a freshman, I improved my long jump from a starting point of 15 feet 3 inches to a jump of 17 feet 9 inches. I love to be able to see improvement in things I attempt in and out of sports. My jump of 17 feet 9 inches came at the best time possible, too. It was good enough for me to finish 12th out of 26 in my district. I was proud to be one of two freshmen in that district competition and to beat out many upper class-men in that competition. I was also a member of our school's Regional qualifying 4 X 100 relay team. Our relay team ran in the regional competition (one level away from state), which is something our team was really proud of. While we did not make it to the next (state) level, we did very well considering we ran with two juniors and two freshmen.  Our high school open 100 meter freshman record time is an 11.9 second run. While I did not run the open 100, I was clocked in my 100 meter leg of the relay at 11.6, and our relay team for 2017 made it back to the Regionals for my sophomore year!

You can also check out my CaptainU profile at http://www.captainu.com/Soccer/2019/SamuelHolstein