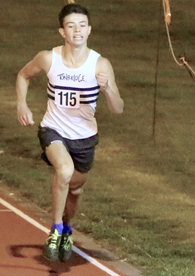 I first received coaching in 2015 when I met my current athletics coach and he asked me to join Lewes AC. I'd done some sprinting, high-jump, and triathlons before but quickly changed my focus to middle-distance running because of a natural aptitude for it. Since then I've competed on the track during the summer in 400m, 800m,1500m and most recently 3000m, with Cross Country being my focus though the rest of the year. Last year I entered my first 400m run and was pleasantly surprised to finish 4th in the Sussex County Championships, despite being in the lower age of U17 men. This year there have been so few events that I've focused on longer distances running mainly 1500m & 3000m getting the school record in the 1500 on my first race this year and 2nd in the Sussex Championships for 3000m in my first track 3000m.

I'm an Australian of Irish & Chinese descent living in the UK. I was born in London UK but I hold both Irish and Australian citizenship. My father was raised in Tasmania, Australia and my mother was raised in Melaka, Malaysia. I've lived and studied in Sydney, Amsterdam, Brussels, London and in Sussex and Kent counties, both in the South East of England, but wherever I've been I've stayed competitive in sport.

I'm a full time boarding student at Sevenoaks School, a selective school in Kent, UK which draws academically strong students from almost 50 countries. I joined Sevenoaks in September 2017. I was invited to join the Sevenoaks elite sports program and my running has continued to improve since. I've enjoyed both individual and team success with Sevenoaks, winning or placing in several inter-school events and representing the school in the English Schools National XC Finals in which we were placed 8th in the country despite a team mishap on the starting line. This year I received a sports scholarship with full athletic colours. My Sevenoaks Diploma was awarded with a distinction in Outdoor Education.

I was recently selected as the captain of the school XC team, an honour that would normally go to a senior student. The XC Head Coach and the school's Head of Athletics believed that I had the qualities needed to lead our team to success. I’m working to bring the Sevenoaks XC team even greater success in the two years of my captainship. Along with my duties as a Sports Scholar I’ve been using my position as Cross Country Captain to support and encourage others; to keep up motivation in these tough times when competitions are scarce. Over the summer holidays I created training sessions which could be compared to show progress, tailored for each year group in levels of difficulty.  With the support of the XC Head Coach I organise races on the school cross country course twice per term, to maintain race and track fitness in the absence of regular inter-school competitions.

Outside of school I compete for Tonbridge Athletic Club in Kent and Lewes AC in Sussex. I joined Lewes AC in 2015. It's nearer my home in Sussex so it's the club I train with on school holidays. I also joined Tonbridge AC in 2017 when I began boarding at Sevenoaks in Kent. School training is great but it's not nearly as competitive as at Tonbridge AC, who have arguably the strongest team of endurance runners in my age group in the entire country. The town of Tonbridge is not too many miles away and I can take a bus to the track, though I rely on the generosity of others to get a lift back.

I'd been working hard towards a successful summer track season this year. I'd hoped to have a shot at a few school records and as well as club, county and national track events. I also wanted to try 400m hurdles (I hurdled when I joined Lewes in 2015).  Sadly the global pandemic hit the UK hard and we went into lockdown from March 2020 for many months. Track training was cancelled or severely restricted and track meetings were cancelled. A few races were salvaged from the season at the very end of summer. I count myself lucky to have competed in five races, setting personal best times in all but one of them. With English Schools Athletics Association extending the season into early autumn I broke the school record for the 1500m (twice) but my one and only chance at 800m was still some seconds shy of the record. I finished 2nd in the Sussex Men's U17 3000m Championship (during a wild storm) in what was my very first 3000m race on track.

With the disappointment of the track season firmly behind me I've turned my focus to the upcoming XC season. Training on my own for 5 months during lockdown was difficult but I adjusted. More recently I was able to do some track training (before another lockdown) where I focused on 1500m and 3000m to help the transition into Cross Country.  Now, as the UK locks down again in a 2nd wave of the pandemic, I can only hope the XC season can be salvaged.

Aside from Track and Cross Country I’ve played Soccer (A & B team) and Rugby (B team) for Sevenoaks. I also take part in social sports at school such as Futsal while I organise and lead weekly runs for boarders through nearby Knole Park.

Running has helped me to be more effective in all walks of life. It's taught me to respect and listen to the advice of those who can help me get better, be they coaches, physiotherapists, teachers or my parents. It's taught me to be resilient, to lose gracefully, to applaud others, to support my team-mates and to win well. I've learned the virtue of hard work and discipline, to set realistic objectives and to focus on long term goals.

Five years ago, when I joined a club to begin training and competitive running, I wanted only to become the best in my school year and perhaps win an inter-school meet. Representing my county at a National Championship was an almost impossible goal but as I continually improved that goal became ever more attainable. I've now represented both Sussex and Kent in National Championships several times in the last four years as well as representing my two schools at National School Championships.

As I improve, my goals become ever more ambitious. I was a relatively late starter to serious competitive running but I continue to overtake runners who once beat me regularly.  In the UK there are very few, if any, full-time professional coaches at high school. School coaches are generally also teachers while club coaches are usually part-time volunteers. I'd like very much to train under a professional coach but my coaches are still qualified and have always been genuinely committed to coaching. I appreciate very much the work my coaches have done to help me realise my potential. Respecting them, taking on their advice, working hard and performing well is the best way I can thank them.

I'm a long way from reaching my full potential but through continued hard work, constant learning, focus and greater specialisation I’ll continue to overtake my peers and achieve ever higher goals. I know I will make a big contribution to a college team.