College Coach? Click here to view all of Jesse's information. 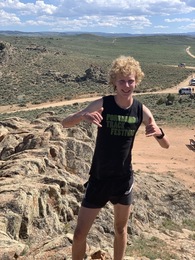 My back hits the court, and I know it’s all over. I have just won the Montana State Tennis Championship. I feel pure joy. Although I have been preparing for this moment since watching my brother play the final a decade earlier, imagining falling to my knees as if winning Wimbledon and reciting my victory speech in my room, now I am speechless.  It almost did not happen. Almost. A week before, down and almost out of the qualifying tournament, I battled back to win. That drive to succeeddefines me.

I almost didn’t play high school tennis at all. Almost. Halfway through my freshman year at an international school in Paris, I knew I needed a change. Although raised mostly in Montana, I had moved to France with my American mother and French father four years before. I was enrolled at an intensely academic bilingual school where the students seemed like mini-executives and spoke at least four languages. I was lost. Sports are where I excel, but they were not a part of this school. I wanted to be a Senior High School Bronc just as my older brother and sister and mother had been.To find a better balance between academics and athletics, I made the difficult decision to move with my mom back to the United States, even though it meant leaving behind my dad, whose work is in France, my international friends and Paris.

I almost didn’t make it at Senior High either. Almost. School has always been hard for me. Every day I go, not knowing if I can keep up with my classmates, let alone my teachers. It is like going into a battle without a sword, unprepared. Despite being bilingual and bicultural, having attended one of the best schools in France and working hard, I always felt like I was failing. Last January, I found out why: I have Slow Processing Disorder. I finally understood why I could never train my brain to go faster, even with countless hours of trying. I work with a learning specialist and am managing the workload in the Platinum Program, an academic track at my high school of all AP classes and a capstone project. I do not give up, even when my classmates finish their work long before me, or when my friends call me slow or stupid. For my capstone project, I planned the first annual citywide charity race to raise awareness and funds for homeless high school students, a huge event that tested my organizational skills and brought in more than $16,000.

I almost continued playing tennis. Almost. After winning the state tennis title as a sophomore, I was on top of the world. Nothing could keep me from achieving my dream of becoming a professional tennis player. Until one thing stopped me: success in another sport, running. It turns out I’m good at it. Choosing between two countries seemed like a breeze compared to deciding between two sports. The tennis and running seasons conflicted, and, as I could not give my best to both, I chose cross-country and have never looked back.  I won the city meet, placed 8that the State championships, made all state, and continue to improve my times.

My father, an Olympic rower, taught me to aim high and work hard. From my mom, who started rowing her senior year at Princeton and medaled at the World University games, I learned anything is possible. Changing countries and sports were risks worth taking. Those life-altering decisions made me dig deep to succeed just like in the last 800 meters of a race or the tiebreaker of a tennis match.  I’ve done it before and I will do it again.