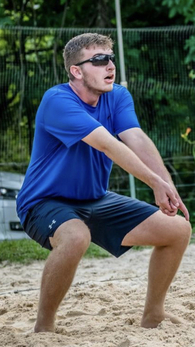 I am mainly a right side, as I am left-handed, but I have played in every position on the court. As the captain of the this team, we have competed in a number of tournaments including the following: 2017 Battle Between Boys Belligerents (1st Open), 2018 Battle Between Boys Belligerents (1st Open), 2017 Boys Junior National Championships (13th Club), 2017 SRVA Regional Championships (Open 1st), 2018 SRVA Regional Championships (Open 1st), 2018 Dennis Lafata Boys Bid Classic (Open 2nd), 2017 K2 Wilderness at the Smokies (Open), 2018 K2 Wilderness at the Smokies (Open 1st), and the 2018 MAVA Boys Kick-Off Classic (Open 1st). We attended the 2018 Boys Junior National Championships(Open 15th). During the 2017-18 season, our 14u team has been ranked #1.  I also played up on the C2 Attack 16u and 18u boys teams whenever possible, and I am almost always a starting player.

I have straight A's for all of my educational career, and I have been in the top 10% of my class for all three years at Woodland. I took and received a 25 on the ACT in 7th grade which awarded me to be a part of the Duke Tip program where I received National Recognition for my scores. Additionally, I scored a 35 on the ACT during my junior year. I received the top award at my middle school, The Warrior Award, for the 2017-18 school year.  My interests include Aviation (I would like to study Aeronautical Engineering or Computer Science in college), flight simulation, computer programming/video games, and of course, volleyball.

My long term goal is to play volleyball in college and become a pilot.