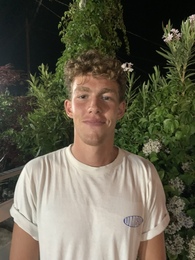 My name is Lorenzo Lindstrom, I’m a 2004 goalkeeper, currently playing in the Italian Serie A for CN Posillipo as a second goalkeeper (with whom I made my first appearance at 16 years old), and as first goalkeeper for the CN Posillipo U18 team (we’ve just finished 4th in our national championship, losing to Pro Recco in the semi-final).

My water polo journey started with a bang when I was just 10 years old, when CN Posillipo asked me to try out for their open goalie position. That same year we won the The Haba Waba international Festival, beating out over 130 teams from all over the world (Hungary, Croatia, USA, Brazil etc.).

Since then, water polo became my primary focus, and my passion has grown exponentially, and I have had the chance to play for two clubs (CN Posillipo youth and Serie “A” and Rari Nantes Napoli Serie “C”), the Italian national team (at the U15 and U17 levels), practice with water polo legends, and attend elite water polo camps.

Playing for the CN Posillipo junior teams meant not only building my base skills over constant around-the-year preparation, but also the opportunity to compete and win tournaments (including the 2019 national championships) and individual awards (2013 -best goalkeeper Calcaterra Challenge, 2020- best goalkeeper Mario Scotti Galetta Memorial). Playing for CN Posillipo gave me the opportunity to play and practice from time to time with many great European water polo players such as Carlo Silipo, Angelo Vlacchopuolus, Francesco Postiglione and many others.

Playing for Rari Nantes Napoli in 2021 as starting goalkeeper gave me the chance fight with the underdogs, for the chance to move up a league from “C” to “B”. We arrived 1st in the championship after a win in the final playoff game against Nuoto 2000 led by Luigi Di Costanzo (former World Champion with the Italian Senior National team of 2011) and qualified for the next year’s Serie B championship. In the Final Playoff game against Nuoto 2000 I was voted as MVP of the match after numerous good saves and a penalty block on Luigi di Costanzo.

Playing for the national team gave me the chance to compete with the best of my age group, both in the U17 Italian national team at the European water polo junior championship in Malta, and the U15 European junior water polo championship in Burgas, Bulgaria, where we ended third in the competition, and where I won the prize as best goalkeeper of the tournament (I blocked 4 penalty shots in our quarterfinal game against Spain, 1 in game play, and 3 in the shoot-out).

Attending elite water polo camps at gave me the chance to learn from the greats.  At 14 and 16 years old I was getting instruction from 4 different Olympic champions: Carlo Silipo, Francesco Positiglione, Fabio Violetti, and Fabio Bencivenga.

In terms of academics and extracurriculars, last year I had a 9.15/10.00 average at Mercalli, one of the highest rated scientific high schools in Naples and in Italy. This year I had an 8.6/10.00 average while also running a campaign and being elected as one of the 4 representatives for the school (of 1100 students), our highest student elected office. During my term I was able to have the principal adopt a student-athlete program for our school and raise more than 6k€ for victims of the war in Ukraine.

As a dual US-Italian citizen, I have grown up believing that I have an obligation to try for the best of both countries. Studying and playing water polo in a college in the US would be the perfect fit for me.

Lorenzo has not yet added athletic information.