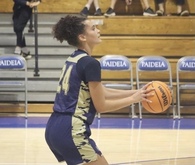 Marlo Simms is a student-athlete, Class of 2023, at Decatur High School near Atlanta, GA. She is 6’3” (6’5” wingspan), 170lb Varsity Basketball and Lacrosse player who excels on both the basketball court and in the classroom. In addition to taking a full load of International Baccalaureate classes (6) in which she earned a 4.5/4.0 GPA last term (cumulative IB GPA is 3.9/4.0), she is semi-fluent in Spanish, works as an intern for the School’s Athletic Director learning the business of Sport, and is a working model signed by the SALT Agency. Biology and Psychology seem to be areas of academic outperformance and areas that she has some initial interest in pursuing in college.

With regard to her basketball career, she has been a starter since 9th grade and earned All-Region recognition in what was a breakout season for her Sophomore year. This past Junior season was very challenging and she surprised herself by rising to meet those challenges. In short, her team was top ranked in the region until two players were dismissed for disciplinary reasons, accounting for 25 points per game. Marlo took leadership in helping to restore team cohesiveness and, in the process, has distinguished herself statistically.  She was rewarded for her efforts with a second straight All-Region selection, her third Varsity letter, and selection as her team’s Best Defender.

Keys to her success have been competitiveness, defensive-mindedness, extreme coachability, and a strong willingness to do the things on the court that no one else wants to, and for which there are no statistical categories.

We have been looking to develop relationships with high academic institutions where there would be a personal fit for Marlo and that would allow her to play basketball at the next level as a means to pay for her education.