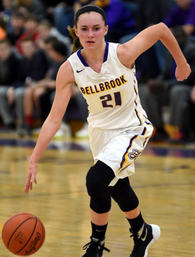 After completing my senior season and leading my team to the final four of the Ohio High School Division 2 tournament I have decided to not play basketball in college.  It was a great thrill to be able to end my high school career playing on Ohio State's floor in Columbus.

I have completed my junior year (2016-2017) of high school basketball and was the starting point guard for Bellbrook High School Varsity in Bellbrook, Ohio.  Our team finished the season at 22-4 and were undefeated in our league (SWBL) for the second straight year.  I was named first team Southwestern Buckeye League, third team AP Ohio Southwest District and team MVP.  Our Bellbrook Varsity will return all but one team member for my senior season.  I along with two other senior four year starters will be hoping to advance our team deep into next season's state tournament.

In my sophomore year (2015-2016) of basketball I was the starting point guard for Bellbrook High School Varsity.  Our varsity team was very successful that year as we finished the regular season 22-0 and finished the year ranked 3rd in the final state of Ohio Associated Press (AP) D2 poll.  We went on to win four games in the state of Ohio D2 tournament and won Sectional and District championships.  We lost in the regionals to AP number one and eventual D2 state champion Kettering Alter.  I was named first team Southwestern Buckeye League and third team AP Ohio Southwest District.  I was also named first team Ohio District 15 underclassman team and All Dayton Area Second team.  For our Bellbrook team I was named team Co-MVP.  My Co-MVP was Ohio AP Division 2 Co-Player of the year Gabby Ozoude.

In my  freshman high school year (2014-2015) of basketball I was the starting point guard for Bellbrook High School Varsity.  I was lucky enough to start with my older sister Madi who was team co-captain and has seen varsity time since she was a freshman.  As a freshman Madi was on a varsity team that made it to the final four of the Ohio Division 2 State tournament which has has been a goal of mine ever since.  Two other freshman played a considerable amount of time with me on varsity that year so our goal was to reach the state final four again soon.  The ultimate goal is to not only reach the final four but to bring home the state championship.  At the end of my freshman year I was named as Honorable Mention on the Southwestern Buckeye League all league team.

Prior to the 2014-2015 season I was named to the Dabbelt Report Dayton Area Freshman to Watch and then named to the Dayton Area All Freshman team at the completion of the season.  I have played AAU basketball since fourth grade with the Dayton Lady Hoopstars,  Bridgette Williams All Stars and am currently playing with Dayton Metro.

I am taking college prep classes in high school and have maintained a 3.31 GPA so far.  I also volunteer to coach younger athletes at our Bellbrook youth basketball camp.

My other sporting interest is soccer and I have played club soccer since the third grade.  I was starting Varsity Mid-Fielder for Bellbrook High School during my freshman fall 2014, sophomore fall 2015 and junior fall 2016 seasons.  Soccer has been a big factor in keeping my conditioning at a high level and improving my footwork on the ball court.  I also see many similarities between soccer and basketball as far as spacing and movement such as the give and go.

My ultimate goal is to play college basketball at a high level.  My strength on the ball court has always been speed and my vision of the court.  This court vision has enabled me to get my teammates the ball in scoring position.  A comment I appreciated from my seventh grade school coach was "She makes everyone on this team better".  I spent a great deal of time working on the form of my shot this past year as I was called upon to score more for my school team this past season.  My goal this year is to increase my strength and to develop my jump shot.  Increasing my strength will allow me to play a more physical style of ball needed at the higher levels of the sport.