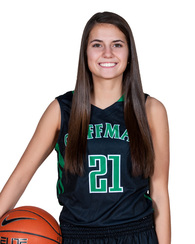 Given our success last season (state of Ohio final four) and that we were only losing one starting senior, we had set big goals and had high expectation for the 2014 – 2015 season.  I set personal goals based on discussions with my coaches to improve my ball handling skills and improve my three point shot.  During my Spring and Summer AAU season I worked hard on these items.

But fate threw us a curve ball and our All-District center, who averaged a double double last season injured her ACL in the fall.  She would not return until the last three games of  the regular season. Our inside-out offense quickly had to change to a perimeter offense to overcome the loss of this key player. I was asked to step up and help fill the void which improved my rebounding and post up moves. If that wasn’t  enough our All-District point guard injured her ACL with seven games left in the regular season.

Basically, we lost over 30 points of offense and over 12 rebounds per game. Again, I was asked to step up and take on point guard responsibilities for these 6 games and the post season tournament. It was a huge challenge but a tremendous opportunity for me to expand my skills and gain valuable experience. We went 5-1 during that period losing the one game by 2 points and winning the remaining 5 by an average of 20 points including upsetting the number one and undefeated seed in the district.  This game was my best performance of the season as I scored 11 points in the fourth quarter including 6 consecutive free throws in the final 24 seconds to ice the game.

Although we did not achieve our team goal of returning to the state final four , I learned a lot about staying together as a team in the face of adversity and unforeseen events. In spite of the challenging year I was able to improve my stats and I was either first or second in every stat category.

Next year we will lose both our center and point guard to graduation and I have already been asked by the coaches to take the team leadership role. And even though we will be saying good bye to three starting seniors I believe our experiences this year will serve us well as we work to be the best Division 1 basketball team in the state of Ohio.

This year I earned a starting position as a sophomore for Dublin Coffman High School, a Division 1A School that made it to the State Final Four. I believe this accomplishment is a reflection of the type of player I am. At the end of my freshman year, I set a goal to start on the Varsity team as a sophomore.  I sat down with my coaches, listened to their feedback and worked very hard during the offseason to improve.  My dedication to conditioning, skill development and long hours in the gym paid off.

I hate to lose! I am very competitive and I play both ends of the court.  I led my team in steals and my primary job on the defensive end of the court was to disrupt the offense at the point of attack.  I also contributed on the offensive side of the ball by being the third leading scorer on the team.

I have worked hard in school to achieve my 4.1 GPA and I grasp new ideas and concepts not only in school but also on the court as well.  I believe I play very smart basketball while having excellent court awareness. This not only helps me contribute quickly to the team but it allows me to get the most of my physical abilities.

My goals for college are to get an excellent education and play the sport I love while contributing to a successful basketball program.

My passion, commitment and dedication for basketball will benefit your program because there will be no one who will work harder to improve and compete at the highest level.