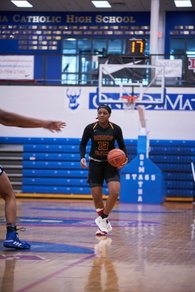 For anyone who has ever been passionate and competitive about anything, you know going to the next level can be simply amazing. My parents always tell people my love of sports started from the time I entered this world. Unlike most, my love wasn't just for one sport it was for multiple sports. I am proud to say I am well versed in basketball, baseball/softball, soccer, football, and I even tried tennis! Starting with basketball and moving through the different sports I got used to being the only girl on the team, that was normal up until about middle school. While always being a stellar athlete, I enjoyed a fair amount of success as a multi-sport player, mostly because God granted me the natural ability of athleticism. I still had my struggles throughout my years in playing sports having been diagnosed with Attention Deficit Disorder, and then going into my freshman year of high school being diagnosed with anxiety. I wondered why this was happening to me and if I would be accepted by my coaches and teammates. I battled with myself internally for an entire year, but I eventually learned to cope with my anxiety with the support of my family, counseling, medication, my coaches and teammates. I was raised with parents who said I could do anything if I put my mind to it, so when coaches laughed when I wanted to try my hand at being a quarterback, I knew I had to prove myself. I also had a special athletic director Tasha Smith in my local boys and girls club who with my parents believed in my athletic abilities. I moved on to win several basketball championships being the only girl on the team and becoming the first female quarterback in my area. I will always remember Tasha Smith, she believed in my abilities to do what people thought was the impossible.

My love for basketball continues to grow day by day. I entered high school and was placed on the varsity girls' basketball team as a freshman, but I was crushed when I sat my entire freshman year. A former coach, who is currently a sports photographer, had been one of my biggest supporters since elementary school. He attended a school game to take photos but for the first time he hadn't gotten any pictures of me. When I asked him why, he told me it was because I wasn't making any points. I couldn't believe that one of my biggest supporters said that, I had several rebounds and assists that game, but he was right I had not put any points on the board. That was my wake-up call that what I was giving the game, was not enough. I told myself I needed to work harder on my outside shot and use my size and ability to drive to the basket more. My Sophomore year was my breakout year, I worked my way into the starting lineup on my high school team and by the end of the season I had again made people take notice of me "MINGO" the girl who can play all five positions. The end of my Sophomore season I had earned honorable mention in the WCAC, and I told myself I would continue working hard to be first in team my Junior year.

I appreciate what basketball has taught me about myself. I have learned that I crave competitive environments, even ones where I may not be the best or the most talented. My basketball experience has also taught me to enjoy intense preparation and working with a team toward a common goal, even when there is little personal reward or recognition to be found. I have never been a selfish player, while some players are looking to score the next three, I'm looking at how I can get my teammates involved and WIN the game. I have also learned to remain persistent even when there may be disappointments. I hope to apply these lessons as I continue my College endeavors. As I consider which schools would best fulfill both my academic and athletic interests, I will look for a University, which is known for its rigorous academic program, but also has a strong sports program. When I get the opportunity to meet or talk with a coaching staff I will ask for expectations of their players to ensure I am a good fit for their team. As my junior year gets closer I'm incredibly excited about how my year might unfold. I'm hoping to be recruited by several Division I, II and III colleges.