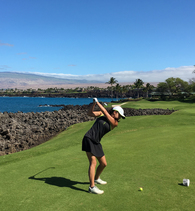 Hello Coaches, thank you for reviewing my profile.

My name is Kanna Crosland, I'm 17 years old, and I live in Salt Lake City, Utah. I'm a senior at the Salt Lake Center For Science Education. I was born in 1998 and have lived in Salt Lake, San Francisco and Tokyo,  Japan.

I started to play golf at the age of 6, when my parents started to play as well. I've had wonderful opportunities to play golf in remarkable places and have had exceptional instruction from the beginning. When I was about 12, I began to play in Junior PGA tournaments and now Utah Junior Golf Association (UJGA) and Future Champions Tour (in Southern California), I love the competition, practice, and friendship.

Since starting high school golf I’ve won 8 regular season tournaments, played every tournament in the number one spot, in region championships I've taken second twice, and in 2016 I was region medalist shooting a 71. In all three state championships I've placed in the top ten, made First Team All-State, and in 2016 shot 72, 78 for a fourth place finish. Also, in 2016 I was selected as team captain.

I'm also a varsity swimmer at East High, which helps me stay in shape for golf, and has taught me to be self disciplined and to push myself, along with golf. By practicing and succeeding at swimming, a sport that I'm not naturally talented at, I've applied the same discipline to my golf practice. For 2016-2017 I was named team captain.

In junior golf I play in UJGA and FCT tournaments. In 2016 I played a full schedule of UJGA tournaments along with the PGA and USGA qualifiers. After playing in 18 tournaments over the summer I’m definitely happy with my progress. I’ve become more consistent, added distance, lowered my average scores, especially on longer courses. At the start of the summer one of my primary goals was to qualify to represent Utah in the Junior America’s Cup, qualifying as one of just 4 girls from the state is tough and requires good, consistent play. I made that goal and traveled to Northern California in late July.

I love school and have attended the Salt Lake Center for Science Education since sixth grade. I enjoy the emphasis on math and science and am currently in honors calculus and honors physics.  I’ve uploaded my transcripts and current test results to NCSA, my GPA is currently 3.9 and after taking the ACT my score is 32. For university I’m working to narrow my field of study, but I am interested in biology, and design and architecture.

For more golf history, images and video visit my (in progress) personal website: