College Coach? Click here to view all of Margaret's information. 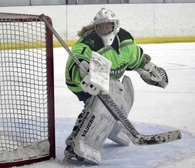 Playing college hockey has been a goal of mine since I began playing hockey in first grade. Every year since then I have focused on becoming not only a better goalie, but a better student and teammate. Playing for an elite club like the Chicago Mission has taught me a lot about what it takes to play not only college hockey, but for the National Team and even in the Olympics. Several Mission alumnae have reached these levels and I hope to follow in their footsteps.

Two people who have influenced me in achieving my goals are Abbey Murphy and my older brother, Mick Burden. Abbey is currently a forward on the Mission u19 team and I have known her for years. Everyone knows what a gifted hockey player she is and always makes it look so easy. But what most people don't see is how hard she works at every practice.  The Mission has an open practice policy, so any player can attend any practice. I often attend u16 and u19 practices and have the opportunity to play with Abbey as well as several other elite players. Abbey is always the hardest worker on the ice, without a doubt. She never takes a drill casually and gives 100%. I have always admired her work ethic and have tried to adopt it myself. She has really inspired me to work my hardest, especially when no one is watching.

My brother, Mick, has influenced me to never give up on my dream of playing in college. Mick fell in love with lacrosse when he was very young. Although we live in Illinois, which is not a big lacrosse state, he always dreamed of playing in college. People would always say what a long shot it would be for a kid from Illinois to play division 1 lacrosse. Mick didn't listen, he just worked harder. Even when he did not make his high school varsity team as a freshman, he didn't give up. In fact, he worked even harder to prove he could be good enough. Injures didn't stop him either. Mick is now a senior in high school and recently signed his NLI, accepting a lacrosse scholarship from the University of Richmond, a nationally ranked program. He never gave up on his dream and never listened to people who told him he'd never make it.

Playing AAA hockey has taught me many things that will prepare me for college.  The most important thing is I have become a better time manager and more organized with high school. Mission teams play a lot of games and travel a lot during a very long season. I do homework in the car, on planes, in hotel rooms, on busses and in airport lounges. I know that it is my responsibility to communicate with my teachers about my schedule and my absences. This is good preparation for being a student athlete in college.

Another thing that I have learned while playing for both the Mission and for OS Hockey/Jr Whitecaps is how competitive AAA hockey is every year and how hard it is to be the best. Every year Mission attends the top tournaments: NAHA, Stoney Creek,  USA Canada Cup, CCM, qualifying for USA Nationals, etc. The level of play and intensity in these games is off the charts. The best American and Canadian players are there. Every shift of every game is a battle. It takes the best effort from everyone on the team to win at these tournaments.

During the last two off seasons I have played in Minnesota for OS Hockey and will be on Jr Whitecaps (grey) this spring/summer. Playing in Minnesota has been a fantastic experience for me. Not just making lifelong friends, but the level and style of play is incredible. I know that some of the best hockey players in the country are from Minnesota and if I can play well there, I can play well anywhere. I love the level of competition in Minnesota, and playing with these elite players year after year will prepare me well for playing in college.

I feel that all of these influences and experiences have helped me along to achieving my goal of playing college hockey. I love playing hockey and I love being a goalie, and I'm working hard to make my dreams become reality.