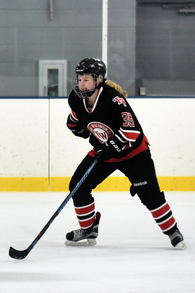 Hello, my name is Alyssa Knauf, and I have been playing hockey since I was four years old. I am a four-time Team Wisconsin athlete and varsity hockey player (since freshman year) for the Rock County Fury girls high school team. I also played youth hockey with the Monroe Youth Hockey Association, from years 2008-2017.  From the age of four I played on boys' teams, playing on the A team from atoms-bantams. I have been fortunate enough to make it to state seven times with my youth teams, and four times with Team Wisconsin.

This past season was very successful for Team Wisconsin U19 and Rock County Fury. The Fury team qualified for the WIAA state tournament March 2020. I was named 2nd team for the all-state tournament. I was tied for second on my team in points and tied for 7th in the state of Wisconsin in regular season. In addition, I earned all-state and all-conference awards as well as 100-point career milestone.

My 2019-20 Team Wisconsin U19 team won state in March 2020 earning us a spot at Central District. However, the COVID-19 pandemic cancelled Centrals/Nationals.

Prior to this season, I have made many state runs, my team and I have never clinched the first place title. Earning second and third place finishes on multiple occasions was heartbreaking, but in those moments are the times where I feel I was able to grow as a hockey player and a person. Every challenge I faced on and off the ice has helped me become a better athlete and person.

Playing for teams such as Team Wisconsin, Rock County Fury, Monroe Youth Hockey, Wisconsin Jr. Stars, Wisconsin Jr. Outlaws, and many others, I have been fortunate enough to play and compete with a variety of people and at the highest level of play.

In college I seek to not only push myself at my academics, but also in athletics.  I am looking for a school to help me grow as an athlete and a student. I'm competitive and love the game of hockey and see myself as an asset to teams I play on.