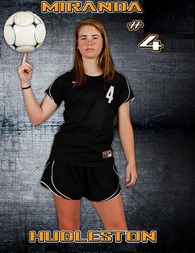 Hello! My name is Miranda Hudleston.  I was born in Louisiana and now live in Athens, AL. I have an outgoing personality and I’m also very active in my church and community.  I believe in treating everyone, whether I know them or not, with respect and compassion.  I do this because I want others to treat me the same way. I was taught to get respect you must first give respect.  My 2 mottos I live by: “it’s not where you've been, it’s where you're headed” and “just do the next right thing.

"Growing up, my mom and dad taught me the world will not give you anything.  You must work hard, speak the truth and be reliable with everyone and everything you do. I have learned this may be difficult at times.  However, in the end, I know it will be a road to success with school, friends and sports.

Please view my video at http://www.youtube.com/watch?v=Aa3I4

All County, All Section, All Area, Class MVP 2 years

Primary - Outside Back and CD/CB /  Secondary – Defensive MF