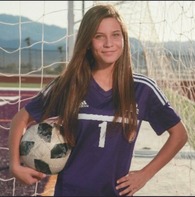 What makes me stand out from other players is my relentless aggression, the high speed of play I developed over the course of several years of playing club soccer for a boys team and my level of commitment. Speaking of commitment, my current team is located 4 1/2 hours away from where I live. This means I travel 9 hours, round trip, for each game and continue to practice with a local boys club team. I am a utility player. I  primarily play Forward but I have experience in every field position. I can also work well from either side and can shoot, cross, pass and dribble with both feet. I am an aggressive goal scorer. I can squeak goals in from tight angles, bury shots from range or get up close and personal to sneak one in with my first touch. I am comfortable using my head. I excel with volleys and am renowned for tracking back to rip the ball away from an unsuspecting midfielder or defender. Most importantly, I am highly coach-able, I am fast and I play with an extreme level of intensity. Please see my highlight video for more details.

My goals is to play professional soccer one day and then move on to work as a Pediatrician at a Children's Hospital with special needs kids. I primarily play Forward / Striker but have experience in every field position and can be utilized anywhere based on the needs of our team.

As of May 2020, my Cumulative GPA is a 3.0. An updated transcript will be submitted once it is received.

My father, a Marine Infantryman and former soccer player, has been training me since I was barely able to walk. More than that, when I was 10 years old, as a player born in 2003, I played for a 1999 Girls Club/Travel Team as there were no girls teams available in my age group. That team folded at the end of the season and I joined a 2003 Boys' Club / Travel Team and spent the next FIVE YEARS with them. Playing on a boys team was difficult, but I am insanely competitive, so I put in a lot of extra hours of work to prove myself. I soon developed what my coaches call a "relentless intensity" and as my speed of play increased to match the boys, I became the team's top scorer.

At some point, an ODP & MSC United coach reached out to me and I have been playing for MSC United 03 Girls Elite (Ranked 8th in Arizona) ever since. To highlight my level of commitment, MSC United is based out of Mesa, Arizona, 4 1/2 hours away. This means I commute a total of roughly 9 hours for league games and tournaments. As 4 1/2 hours each way is too far to drive for practices, I am currently training with the local boys’ club / travel team. The team is really good and their coach is awesome so it is definitely a good thing.

Over the FIVE YEARS prior to earning my position as the starting forward, my high school team averaged the following (Maxpreps):

In the 2018/2019 season I became the Varsity Team's starting forward and they had their best season ever:

I had 46 of the 71 goals our team scored at an average of 2.7 goals per match with 33 steals and was Ranked #2 in Arizona for Goals Scored.  The remaining 25 goals were divided among 6 other players with the next highest scorer tallying just 11. For my performance, I was given an Honorable Mention for the Arizona Republic High School Player of the Year, named AIA All Region Offensive Player of the Year and listed on the AIA All Region First Team.

In the 2019-2020 season, there was a tightening in our statistics offensively as opposing teams adjusted their play styles and hit me with double or triple coverage. Our record was as follows:

Despite all of the added coverage against me, I still managed to score 42 of the 65 goals my team accumulated at a average rate of 2.6 goals per game and was Ranked #1 in Arizona for Total Goals Scored. The remaining 23 goals my team scored were divided among 8 other players with the next highest scorer tallying just 10. Defensively, I had 51 Steals, a 54.5% increase from the year prior, and helped contribute to a 32% reduction in goals scored against us. At at one point, was even named the MaxPreps / United Soccer Coaches Arizona High School Girls Player of the Week (Week 9: Jan. 27-Feb. 2).

At the conclusion of the season, and for the second straight year, I was named the AIA All Region Offensive Player of the Year and listed on the AIA All Region First Team and was the first girl from our High School to receive a conference award in being named to the AIA All Conference Second Team. I was also given an Honorable Mention as one of the "Best of the Rest" regarding the Arizona Republic Player of the Year nominations.

My High School Career Statistics are as follows (MaxPreps):

I am the highest scoring and most decorated soccer player in the history of our school.

My Sophomore year I also ran for our Track & Field team:

My Freshman Year I tried tennis, and though I only played on the JV team, I went undefeated in both singles and doubles competition.