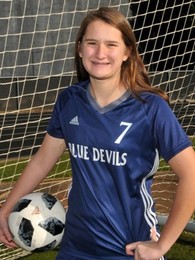 My name is Eliana (Ellie) Johnson and I desire to play college soccer at a school that is a great match for my career path, on-field skills, strong work ethic, commitment to ‘team’, and desire to succeed at the highest level. My coaches have identified my strengths as: coach-ability, vision to read the field, put the team before myself, versatility to play multiple positions, speed on the ball, and strong work ethic.

I am a dual citizen of the USA and Australia, and my ultimate goal is to play football for Australia at the national level. Ever since meeting the Australian team at the 2015 World Cup and being encouraged by the players, I have dreamt of playing at their level.

I will graduate from Norcross High School in Atlanta, Georgia in 2022 and currently enrolled in honors, accelerated classes , and AP classes with a 4.0 GPA (unweighted).

More about my football:

I am excited to make a change of clubs and play the 2020/2021 season with the current ECNL national champions GSA 04, after having played ECNL for three seasons with Atlanta Fire United (AFU). At AFU, I was nominated as ECNL player to watch for 2017-2018, 2018-2019, and 2019-2020 seasons. I attended PDP in 2018, and subsequently was selected for the ECNL national ID training camp in Portland, July 2018, as well as the national id2 selection event in Kansas City, September 2018. My team has played in the ECNL Nationals in Seattle in 2018, and returned the finals in San Diego in 2019. I played center back for AFU during the 17/18 and 18/19 seasons, and in 19/20 season I have primarily been playing holding midfield as well as attacking midfield.  In addition to club soccer, I also play for my high school and was named "Defensive Player of the Year" in my freshman season.

And in addition to playing soccer....

At Norcross High, I play the flute in the highest level band,  Wind Symphony. In addition to flute, I have taken piano lessons for six years and regularly perform recitals and receive “Superior” results. I was selected and represented Pinckneyville Middle School for basketball as part of the highly competitive Gwinnett County competition. The 2018 team for which I was the starting point guard won the division and was runner-up in the county final. I also play USTA and ALTA tennis when my soccer schedule permits, and when I’m not travelling during the ECNL season I lead a children’s small group at my church.

I have really enjoyed playing several sports, and I have learned so much about working hard, teamwork, and succeeding in high pressure situations, but my passion and greatest enjoyment is playing soccer. After being selected in the national ID camps, I now know that I want to play soccer at the highest level, and I’ll keep working hard to get there.