College Coach? Click here to view all of Grace's information. 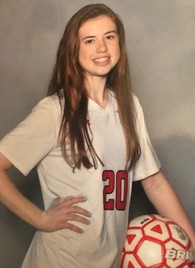 Soccer is a huge part of my life and getting to play is something I look forward to every day.

I started playing at Fox Valley Strikers when I was 8 years old. While playing at Strikers, I developed my soccer skills and grew as a player.  New coaches were introduced, including Anne Poulin, one of my biggest role models, that pushed me and challenged me to the best of my ability allowing my passion for the game to grow. In the summer of 2016, I switched to Galaxy Soccer Club. This new environment pushes me to become better as I am faced with new, higher level competition. My love of the game drives me to play every game with 100% heart and 100% effort. Whether it’s practicing soccer, playing soccer games or even in high school gym class, I am excited to have a ball at my feet.

As a Defensive Center Mid, my role as a player is to help and support my teammates on and off the field. On the field, I am responsible to drop off and cover my teammates as they move forward. I am also expected to open up and provide a drop off to switch the ball or to find new feet. I go hard into tackles and understand the importance of winning every ball from the opposition. Off the field, my role is to help my teammates by example or with constructive information I have observed.

I have become more involved in the attack. During High School season, I started at center forward. I was ranked in the top goal scorers for Chicagoland soccer. This was a change for me. In the past two seasons, I was mainly a defensive center mid, but now I have embraced more of the attack and have started to play forward as well as attacking center mid. As an attacking center mid, my role is to move the ball up the field and play balls in for my teammates to run onto. One of my strengths is keeping the ball and playing at a fast pace up the field. My touch on the ball is also a strength because when balls are played to me, they are either up the field or to my feet and my touch allows me to play that next ball. Not only am I responsible for keeping the ball and moving up the attack, but also creating goal opportunities. I work to make the plays where either I or my teammates can score off of. Currently, due to injuries on my team, I am needed at the six, defensive center mid position. As these players continue to rejoin the game, I will be even more incorporated into an attacking role.

As I have grown as a person, my style of leadership has changed. In the past, I was a leader by communicating directly.   Now, I lead more by example.  As a Center Mid, my role as a player doesn't stand out as much compared to the forwards who score goals or the center backs that save them. So, I lead more by the decisions I make as I create the play and create opportunities for my teammates. However, as I build in the attack, my contributions help set the pace of the game.

Academics are a high priority to me. I am always looking to challenge myself academically by taking AP and Honor classes. I was on High Honor roll throughout Middle School and my first year of High School. I enjoy math and science related classes and look to focus on something related to those subjects in college at a high academic level.

I work hard in the classroom as well as on the field.  I am a member of the National Juniors Honor Society and received the 2016 President's Education Awards program for Outstanding Academic Excellence.  I participated in ODP in 2013 and 2014 and was selected for the Illinois State Team both years.   While at Strikers, my team won the 2015 Presidents Cup tournament and were finalists in the Region 2 President’s Cup.

In addition to academics and soccer, I am a member of Key Club at Batavia High School. I chose to join this club because it allows me to give back to my community in many different ways by babysitting, fundraising, working with Feed My Starving Children and volunteering at community events. In addition to Key Club, I am a member of the Batavia High School Mathletes; Link Crew, an organization that helps Freshman transition into High School; and National Spanish Honor Society.

I look forward to continuing my soccer career in college.  I believe the structure necessary to be successful with soccer will provide me an advantage entering the next stage in my life.  Soccer has allowed me the opportunity to express myself as a competitor and has given me the belief and confidence that I can accomplish my goals.  As I mentioned earlier, academics are extremely important to me because I understand that someday there will be life after soccer.  However, I will savor the time I have to play the game I love for as long as I can. Soccer can have some pretty indescribable effects on a person and has definitely affected me.