College Coach? Click here to view all of Taylor's information. 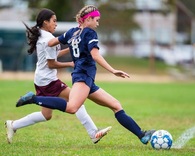 I grew up a competitor.  No matter what I was doing, I always pushed to be the best.  When I was just two years old, I joined a local dance and gymnastics academy where I always kept my eyes on the top athletes in training.  By the time I was five, I was performing advanced gymnastics routines and soon after joined the competitive travel team, which required 30 hours of rigorous training each week after school.  At the age of seven, I won the national title in dance and gymnastics for my age group in Myrtle Beach.  The same year, I traveled to Hollywood with my team to compete in a live television show called “Live to Dance.”  Although we didn’t win, I learned many valuable lessons about competition and what it takes to be the best.  As my training continued over the next few years, I became more skilled and I wanted more out of my athletic career.  I thought about going into gymnastics training for the Olympics, but after being told that I was “too old,” I began to consider other athletic options.

When I began seventh grade, I finally decided to switch gears.  I gave up dance and gymnastics and began playing soccer.  The sport came very natural to me.  I was fast, powerful, and quick on my feet.  Other players would often ask me who I played for and how long I had been playing, and many of them did not believe that I was new to the sport. Within a year, I tried out for the Olympic Development Program and made the team.  Not long after, however, I broke my tibia and fibula doing a flip throw and I was grounded for my entire eighth grade season. As a freshman in high school, I made the varsity team.  My coach was so impressed with my skills that he referred me to the coach of the Players Development Academy (PDA) out of Toms River.  I tried out for the team, made it, and I’ve been committed full time ever since.  I currently travel to Toms River (which is an hour and a half north of where I live) three to four days per week to train in addition to the travel that is required for games and tournaments.  This is a lot to handle on top of taking four AP courses in high school, but I have learned to manage my time effectively along the way.

After high school, I hope to continue my soccer career in college while majoring in biology.  As an athlete, I have always appreciated the resiliency and wonders of the human body.  My goal is to work in the medical field as an anesthesiologist or physician in some capacity.  I know I have a lot of college in front of me, so getting to play soccer would make it that much more enjoyable.