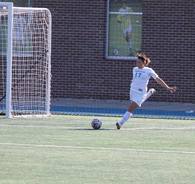 Yá át tééh.  I am Hannah Rayne Etcitty, an enrolled member of the Navajo Tribe from Gallup, New Mexico, and am entering my senior year of College. I was a former player with Chicago State University and am now looking for a University so that I may pursue my Master's Degree while finishing the last two years of my eligibility.

In 2014-2015, I was a starter for my college team and received the Coach's Choice Award. I mainly played as center back, but am willing to be trained in any position.

During my high school years, I was a starter on my high school varsity team since 8th grade and had been named     All District 1st team every year from 2009-2013.  I was named  Player of the Year in 2012 for our district and selected for the All-State 2nd team in 2012 and 2013.  In 2010, I received Honorable Mention to the All-State team.*   I attended University of Notre Dame Soccer Camp in July, 2013 and was selected for the All Star team.  I have also attended the University of North Carolina Soccer Camp for the past two years.

As a player, I am smart, have a quick mind, great speed, agility, outstanding endurance, and the flexibility and range of skills to play many positions.  I have mostly played as left  Striker on my high school team.  But during the last half of the 2012 season I played   Sweeper, because that is where my team needed me the most.  I also played defense and was team Captain in 2013, as this position suits me well because of my ability to quickly and accurately read the game and implement strategy, as well as excellent ball-handling skills.  Due to our rural location, club soccer was not feasible for me so I attended multiple summer camps to continue to develop my skills and optimize "ball time."

Academically, I attend a charter high school which allows me to attend college at the University of New Mexico, branch; so when I graduate in 2014, I will receive both a high school diploma and an Associate's Degree in Liberal Arts.

I would like to balance a quality education to work toward a career in federal law enforcement with my ultimate goal to play professional soccer after college.  I would like to meaningfully participate in a strong and competitive soccer program, but financial incentives and assistance will definitely be an important factor in my decision-making.

Yes. Since sophomore year, I have attended a charter school in which my high school courses are taken as regular classes at the University of New Mexico. Therefore, all but one of my last three years of high school classes also count toward my Associate's Degree in Liberal Arts, which I will also complete upon high school graduation.

Yes. For the last three years of high school, all but 1 of my classes are being taken at the University of New Mexico branch in Gallup and are college classes taken through the University in duel fulfillment of my high school graduation and an Associate's Degree in general studies.