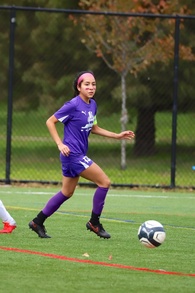 I started playing soccer around age nine, which is considered quite late in the world of soccer, but that never made a difference in my development as a player. At age 11, I moved from rec into my first travel team which was seen as super fast progression. Every coach I've ever had, has told me the reason I progress and pick up skills so quickly is because of my "natural raw talent" for the sport of soccer, that I am so eager and willing to mold. My speed of progression in the sport, as well as my speed, has set me apart from other players immensely.  For as far back as I can remember, coaches, parents and even parents from opposing teams have continuously commented on my eye catching speed with and without the ball. But what I think really sets me apart from others, is my never ending desire to work hard. I love putting in work day in and day out for my sport. Whether that'd be in my personal training sessions, club practices, high school practices, strength training at the gym, or simply by myself at the field working on what I think I need to work on - I don't mind the amount of work. I simply just love working hard. And am never afraid to work hard despite what obstacles I may face, to meet my goals.

As I grew older within the sport of soccer, I found myself being one of the few freshman within my High school to make Varsity, and become a starting player. As well as  playing club soccer for NYFSC, a New York Premier League team/State Cup Participant team, where I  continued my growth as a player. Upon moving on from that club, at only 15 years old, I was the only, and youngest girl selected within my previous club, GGFC, to play up in age groups at the U19 'A' Team level. It was there where my work ethic was pushed to new extremes, as well as my development as a player on and off the field. Being surrounded by girls who were all older than me, some committed to play soccer at the D1 and D2 collegiate level, really only inspired me to work harder to earn playing time, as well as achieve my own goals of playing collegiate level soccer one day. It was an honor to be selected to play up in age groups for that club. Even playing amongst older players, I found that I was still able to excel there, as long as I put in the work.

Now,  at 2017, I am currently playing club soccer for one of the leading club teams in all of New York City. Downtown United Soccer Club/DUSC. I play for their girls Academy, 2001 GU17 team. In my debut game for DUSC, I started, as well as scored our first goal of the season. As a player, I continue to grow on this new club team, and better my game continuously.In my sophomore year of high school, I helped lead my team in goals scored to becoming conference champions, as well as semi finalists in the city playoffs, I am in my junior year of high school now. All three years so far, I have been a Varsity starter, as well as leading goal scorer in both my team and teams division. Not only that, but I have been a teammate...A teammate that is continuously there to support, motivate, and lead the girls on my team. So that we work together.

Being a Vanguard High School honor roll student  I am extremely dedicated to excellence both on the field and in the classroom. I'm determined to not only balance being a student athlete, but excel in both athletics and academics. My strong willed, resilient, hardworking,  and dedicated personality has definitely set me apart from others, as well as shown immensely in my game play and training. My desire to achieve my goals of playing collegiate level soccer, and hopefully, one day professionally in the NWSL, improving daily in the sport I love whether it'd be on the field or in the gym, as well as staying true to academic execellene and majoring one day in athletic training/kinesiology in college, drive me everyday. Thank you, for considering me, as apart of your 2019 recruiting class.