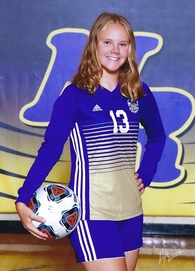 I started playing recreational soccer when I was 4 years old.  It was also around this time I started playing softball, attempted karate, took piano lessons, and for a very short time, danced tap and jazz ballet.  However, soccer was the only extracurricular activity that I continued to enjoy.  At age 9, I advanced to playing in our town's travel league and joined Ohio Premier Soccer Club.  When I was 13, I changed clubs and began to play for Internationals SC.  I chose to switch clubs because I felt that Internationals would provide me with a more competitive and structured environment in order to grow as a player. However, being competitive is not the only life skill that soccer affords me.  I love playing soccer because of the friendships I formed with my teammates, as well as  learning to be a leader on the field.  My goal for high school soccer is to become Team Captain by my junior year.  Some of my favorite soccer memories include attending the Midwest ODP camp in 2018, winning the WAGS Tournament in Washington, D.C., and getting the opportunity to be coached by April Hendricks, former FIFA World Cup Champion and US Women's Soccer Technical Director, who told me that she really liked the way I dribbled!

Because of my commitment to soccer, I was able to make one of my personal goals come true.  I made the high school varsity team my freshman year where I was occasionally a starter, but always played at least half of every game for a Division 1 high school.  My coach also awarded me Rookie of the Year trophy. In total, I scored three goals during my freshman year as a defensive midfielder (position number 6), including a goal during our District finals game and a header goal from a corner kick.

As my grades demonstrate, I have the ability to balance both academic work and my commitments to soccer.  Currently, I am a freshman taking Honors classes in every subject that allows me to do so.  For the first two quarters of my freshman year, I have maintained all A's with a 4.4/4.0 GPA.  I also am involved in Spanish Club, Key Club, and Student Council, and I perform various community services.

This past year, listening to some of the senior girls talk about how this was their last year of playing soccer - ever- sadden me.  That is when I realized that I wanted to continue playing soccer at the college level. It is a sport that I have been playing since I was four, and it would feel odd to no more have weekends filled with games,  goals of winning a tournament, and spending quality time with teammates.   I am hoping to find that perfect fit where I can be a contributor to a college team as well as pursue my academic interests.