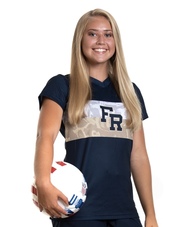 I am excited to announce I made  a verbal commitment to Penn State Behrend.   Thank you to everyone for your interest and time with me.

My Bio - I am a Senior,  a Captain and All Section Award recipient, on the high school team.    I also play club soccer, Futsal, throw Javelin and Discuss, do speed and strength training, and am a past two time national ice dance competitor. I also wake surf and snow ski too.

I am currently a five  time HS Letterman and section champs in soccer my Freshman year.

I also play futsal for the Barbarian Futsal Club.  Was selected to the U.S. Youth Futsal International Team traveling to Argentina the last week of July 2019. This entailed a state ID trial selection to National ID trial on Kansas City and there is where they decided who would represent the US for each of the age groups

My Futsal team placed second at the US National Futsal Tournament in California in July 2018.

2018 HS soccer season I started and played every game and rarely was subbed out. We had to make adjustments as a result of our Senior Center D having an injury. Due to this I was asked to do something I had very little experience playing. I played center defense and led the team for 13 of our games.  Six of those games we had shutouts. In addition to those six games we had two games that were 0-0 until we lost in the second overtime.  I played outside Mid for the other games and scored three goals and had several assists.

I play Cup soccer for the Riverhounds Development Academy. I was on the East team in 2018-2019 and in spring for 2019 I tried out and accepted an offer to train and play for Pittsburgh Main where they play in the ECNL league and train three days a week.  I look forward to the additional training to be as prepared as much as possible for college.  I am a versatile player.  For cup I played mostly outside midfield and I also play defensive and attacking Mid. Recently (during Memorial Day tournament) due to injuries on our team I played center D and outside D.

My 2016-2018 Foothills cup team dissolved but I played mostly forward, outside midfielder and a little outside/center defense.

2018-19 Futsal season - Dec 2018 I was selected to play for the 2000 team and won state cup and in January 2019 we went undefefeated and won Great Lakes Futsal Regionals.  2017-18 Futsal season I was the youngest selected to be on the Barbarian Futsal team who played at the US Futsal National tournament California in July of 2018 in the 99 age division where we placed second. I also had the honor of playing on the 99 age team in the 2017-18 local league called Total Futsal where we placed first.

In addition to my background I think it’s good for all to know I am a two time national qualifier for ice dance.  In 2011 I placed 6th in our nation and 2013 I placed 11th in the nation. In 2014 after 10 years of training in ice skating I stopped competing so I could dedicate that time to training more in soccer. We believe this along with being on a jump rope team are key contributors to my speed and strong athleticism.

I have been training at National Speed and Strength in Norwin, Pa for over three years.

I volunteer for various projects through our schools Rotary Interact club. Also, every Christmas season since I was a little girl I have been ringing the bell for the Salvation Army.  I am VP of the club for my senior year

Thank you for your time. Please feel free to contact me if you have any questions.