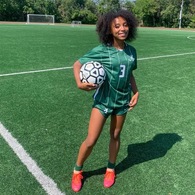 I've been playing soccer since I was five years old like most at a young age but i didn’t really stick to it. For four years, I ran cross country and did gymnastics, and for as long as I can remember, I also ran track because it was my families shared sport. In which my constant need to stay active plays a significant role in my life.

I decided to start taking soccer more seriously during my sophomore year because I want to play collegiately at the highest level I possibly could. So I pushed even harder than before to flourish, and I'm still improving both on and off the field. I'm a super fast player who is actively making runs to open up the field for my teammates while also pressing the goalie and opposing defense line to their limits. Despite having played in recreational games, tournaments, and Futsal, I entered ECNL RL with less experience than the average player. But I don't compare myself to other players because I have a unique game that sets me apart from the other recruits. When I tried out for the Pittsburgh RiverHounds SC I had enough to prove with just high school experience to earn a spot on their regional league team. I entered a completely new soccer experience once I joined club soccer. When I became aware that there was a higher team ECNL I would go to their games when they were in town and studied the game pace and play on film and in person to point out what I needed to work on. Unfortunately, I have yet to play an ECNL game but I aim to keep working to prove to my coaches even more that I deserve to earn a spot on the roster.  Or take my talent elsewhere. In a matter of just my previous season I have improved greatly with the help of joining club.

Academically, I am a hardworking student who, unlike many others, enjoys school. While I may not be at the top of my class, I humble my work and treat it as such. I never give up and I always look for opportunities to learn to my maximum potential, which demonstrates my development as a player and a person. Ultimately, playing striker and outside midfield pushes me to new heights by allowing me to build confidence on the ball. Over the years, even my coaches have expressed their amazement at my progress and how I constantly seem to catch on and excel from others.

I feel that I not only have the skills and talent to compete at the college level, but impact the program I come into. I currently a two-sport athlete and a natural born leader. My loyalty, ability to listen, and work ethic  will make me a great asset to your team. My HS coach once told me that I must try to improve by 1% each day, and that is what encourages me every day.