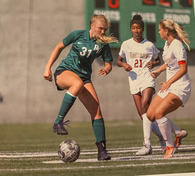 Hi Coach,  my name is Berlyn Dibble, I'm the starting center mid for the La Roca ECNL 04 team in Utah. I've been the team captain for the past three years and start every game in the middle.  I'm 5'10 with a commanding presence in the midfield and can attack with speed off the dribble, distribute to deep targets accurately, and I regularly continue my runs to set up scoring opportunities with combination play. I'm a strong and physical defender in the midfield who reads the game well and jumps passes to win her 1 vs 1 battles.

My stats, I started 45 out of 51 games at the DA level the past 3 years for a very competitive La Roca team and continue to be an impactful player in the ECNL league. I primarily play the six position, but also get into the attack regularly and have shown well while playing the attacking cmid role. My La Roca team were the state cup champions in 2016, and I was one of 16 players invited to the US Soccer midwest combine later that year. I have been an ODP State region 4 player 2014-2017 and a region camp member.

Now that we switched from DA to ECNL, I got the chance to play high school for the first time this year. I was a first team All-Conference and First Team All-State player scoring 10 goals while contributing 16 assists as a defensive center mid for Rowland Hall. We won the state championship this fall and I was the team captain in my first year with them. I've had a few dozen Universities reach out, but some were too expensive, or just weren't the right fit. I want to be a contributor for a D-1 program that will help me to continue to grow as a player.

I would say distribution is my strength. I am a playmaker who can control the midfield both offensively and defensively and I love to play soccer. I also take a fair amount of my team's set pieces. My GPA is 3.5 currently and I'm trying to continue to raise it each term.

My highlight film can be found here:  https://youtu.be/t1cvB81VjxY

I appreciate your time and consideration.