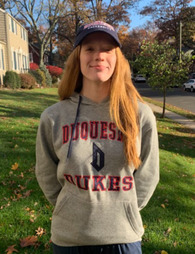 I started swimming when I was 7 years old and have always loved the competition. I was on the smaller side when I was much younger.  My club team, the Fanwood-Scotch Plains YMCA (FSPY), is a very competitive team. For several years, I was assigned to lower practice group because other swimmers matured physically before I did.  When I was 12, I did not even qualify for YMCA Silvers or States.

The next year, at age 13, I practiced hard and made both Silvers and States. After reaching those goals, I really began my quest to make national times.  At Scotch Plains-Fanwood High School, I was the top swimmer for the 200 and the 500  Free and earned a varsity letter as a freshman.  I scored points in both the 200 and the 500 to help our team win the Union County Championship in 2019. During my sophomore season, I represented SPFHS at the NJ Meet of Champions in Sewell, NJ.

In 2020, the NJ YMCA States meet was canceled, and I lost my last chance to make Short Course and Long Course Nationals because of COVID. Pools were closed until September.  During the summer, one of my teammates and I asked a family friend if we could practice in her backyard pool. We used a tether to stay in shape because team practices were banned.  I also ran 10 miles a week to stay in good cardio shape. The YMCA fall season restarted in Sept., but then the governor closed indoor pools again in December.  FSPY held dry land workouts outdoors, and I used my YMCA membership to swim unsupervised laps.

Our high school swim season started late, and the meets were virtual. It was weird not to compete against our opponents in-person, and we did not know who won or lost for a week (or more.)  The girls and boys swam against each other, but it wasn't the same. The season was mostly disappointing until a final live, in-person meet against our biggest rival, Westfield. I won the 200 Free and set our high school record for the 500 Free and was named Athlete of the Week by the local paper.

Next year, my goals are to swim a sub-5:00 in the 500 Free and a sub-17-minute time in the 1650.  As a senior, I will be a leader on both my club and high school teams. I have endless energy and enthusiasm for everything I do -- both in and out of the pool!  Next, I plan to continue my swim career in college.  I am interested in health sciences and hope to visit college campuses in person this summer or next fall (whenever COVID is over).  I have lived in New Jersey all my life and am looking forward to going away to school, having new experiences, and making new friends.