College Coach? Click here to view all of Kasey's information. 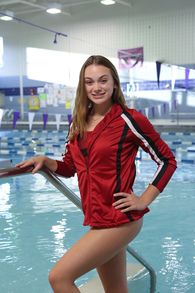 Freshman year was definitely the most important year for me so far; however, it was not because I swam my best that year, it was because of what I learned, and how that knowledge has helped me so far. The year before my freshman year, I won both the 100 breast and 200 IM at the YMCA State Championship, including breaking a thirty year old YMCA record in the 200 IM. At that same meet, I qualified for YMCA Nationals in Greensboro NC.   As an eighth grader, I was able to compete on the varsity team where I became the first eighth grader to hold a record (100 breast) and qualify for the NYS meet. Eighth grade was definitely a year of many accomplishments, that I am very proud of; however, because of the amount of success I had, I knew I had to put even more work in my freshman year to achieve that same success.

Freshman year was definitely a learning curve, as one learns more in defeat than winning. I had to learn how to study properly, and balance swimming and school.  I was able to end the school year with an overall average of 97%. Even though I gave 110% every school day, and every practice, I was not as successful in the pool as I was out. Going into YMCA states (not on taper)  I was expecting to win my events as I did the year prior. Unfortunately I placed second in both my 100 Breast and 200 IM. I went from swimming a 1:07.65 in the 100 Breastroke and a 2:09.96 in the IM the previous year, to swimming a 1:08.01 and a 2:11.80.  Although disappointed, I was excited to compete at Y nationals 3 weeks later (on taper) with amazing swimmers. All this excitement quickly turned to disappointment when I added time (.17 in the breastroke and 1.11 in the IM). This was a huge let down and I was devastated for weeks since I had worked so hard and it didn’t pay off.

Over the summer after my freshman year, I did my research and discovered that swimming isn’t just about what you do in the pool, but a lot of it is what you do out of the pool.   A nutritionist helped me learn how to properly fuel my body with the right foods and vitamins, (I was often tired and sick, while growing 5 inches that year) especially on meet days, and how to recover from hard practices. Both of these small changes have contributed a large amount to the success I am having now. That summer I also focused on dryland, doing most of it by myself and with a coach since my club team had not offered this type of training. I have gotten so much stronger over these past few months and  it is paying off.

As I head into my junior year I am excited to use what I’ve learned and continue to drop time. My passion for swimming has only grown over the years, and I am looking forward to continuing my swimming career at the collegiate level.  Many of my competitors train more than just the 10 hours I put into the pool. I am excited to see how much more success I will have with more experienced coaches and weight training. As a student athlete, I believe a healthy balance between academics and athletics is necessary, and I am looking for a college that will offer me both.

Yes. chemistry , spanish, and us history