College Coach? Click here to view all of Viankah's information. 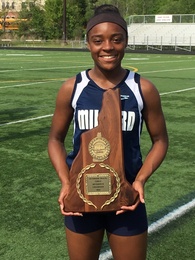 I have committed to Stony Brook University.

When I go to college, my aspiration is to become the best student athlete I can be as well as a Neuropsychologist. I want to continue to grow, and reach  my fullest potential.  In sports I have learned that if you do not lose there is no room to grow. In order to succeed, failure must also come along the way.

I have a very strong support system from my family, friends and mentors.  My determination, hard work, and dedication are all attributes instilled to me from my family. I will continue to conduct myself in a respectful manner representing my family, coaches, team,high school and myself.

I was chosen for a leadership program NH Teen Institute and loved to help others doing this. I have volunteered for the Nashua Soup Kitchen and Shelter. I am in the Spanish club, National Honor Society, and played Varsity soccer for two straight years until I decided to concentrate primarily on track. Academically I am an honor roll student. In indoor track my freshman year I won the Dartmouth Relay's classic 300 meters with a time of 41.10. In the New Hampshire State Indoor Championship I was the runner up in the 55 meters with a time of 7.36 and the 300 meters with a time of 40.55. In both events I broke my high schools records. I was honored to be selected as All State as a freshman.

On February 28th I competed in the New England High School Indoor Track and Field Championship at the Reggie Lewis Center. I placed 2nd  in New England in the 300 meters with a time of 39.99. I also anchored my teams Four By 200 Relay Team which placed 6th overall and broke the New Hampshire High School State Record. On April 13th I was selected First Team All Area All Star Team via the Nashua Telegraph.

My indoor track season for my sophomore year was cut short due to a hamstring injury two days going into the season. I was sidelined for all of the indoor track season.  I continued my rehabilitation on my hamstring for the majority of the outdoor track season. I returned on May 09, 2017 at John Stark High School and won the 100 meters 12.50 and the 200 meters 25.60.  I participated in the Division 2 Outdoor Track and Field Championship on May 27, 2017 and won the 100 meters with a time of 12.56 and the 200 meter state championship with a time of 26.2. I am glad with the overall victories but these times are not reflective of my ability . I was honored to be named All State again and the back to back Division 2 New Hampshire State champion in the 100 and 200 meters.

My 2018 indoor track season I focused on building my legs and training for the outdoor season. I focused on a field event and chose the long jump. At the 2018 New Hampshire State Indoor Track and Field Championship I won the long jump title with a jump of 16.7. I also anchored my  4 by 200 relay team to a third place ranking in the state.  I was also named All State for the indoor track season.

On March 3, 2018 I competed in the New England High School Track and Field Championship held at the Reggie Lewis Center in Boston. I competed in the long jump and won the New England High School Championship with a jump of 18 feet and three fourths inches. It was a great honor being the New England Champion. On 04/13/20108 I was honored to be named the Nashua Telegraph Indoor Track Athlete of the year. This outdoor season I jumped 17 11 .25 inches to win the Londonderry Invitational. At the 2018 New Hampshire State Track and Field Championship I won the 200 meters for the third consecutive time with a time of 25.55, it was a safe time and I plan on improving in that area. On June 02, 2018 at the Meet of Champions I won the New Hampshire State Long Jump Championship with a jump of 17 6 .25 inches. On June 26, 2018 I was named first team Nashua Telegraph All Star and First Team All State. I look forward to my upcoming senior season.