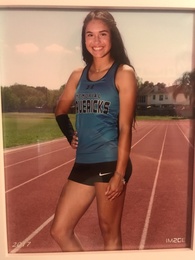 Thank you for taking this time, to view my profile.  My name is Reagan Gallagher and I am a sprinter and long jumper, at Pasadena Memorial High School, in Pasadena, Texas.  I began running track, by joining the City of Pasadena Summer Track Program, at the age of 8.  That's where I learned to love running and competing! At the age of 10, I went to The Hershey Track and Field North American Championship Meet, where I placed third, in the 200 m.  At the age of 12, I went back and won the 200 m.  I ran varsity track, as a freshman.  Competing in the 200 m, the 4 x 200 m, the 4 x 400 m and for the first time ever, the long jump.  As a freshman, I was the long jump district champion, runner up in the 200 m and I was a member of the champion 4 x 200 m team.  I went on to take third place, in area, for the 200 m and qualified for region.  I was voted MVP of the the varsity team.  While being a member of the track team, I also played varsity softball.  For softball, I was named District Rookie of the Year, First Team All District Outfielder and All Academic Team.

My sophomore year, I did not get to run, due to an injury.  I have put in a lot of work and I am ready to come back, to compete again! Due to my injury, I have gained an interest in studying physical therapy, in college.  I have a 4.1 GPA and know how important it is to keep up with school work, when juggling a busy athletic schedule.

I love to compete and am always willing to put in the work needed, to compete with the best.  I am open to all colleges, that match what I'm needing academically, but I would also like to be on a highly competitive track team.