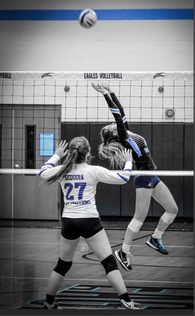 
I believe the combination of excellence in academics, multi sports, and my achievements/continued development on the volleyball court represent a very strong candidate for your college program

My sophomore year has been a successful year of development and achievement in both academics and athletics.  Through hard work, our high school volleyball team qualified for the state play in round (top 24).  My hard work was recognized by being selected to the All Region 1st team.  Academically, my current GPA is a 4.57 and I was elected to the National Honor Society.  During the winter/spring, I successfully made the 17 Gold team at Club One Volleyball (#2 national team) as a 16 year old while also lettering in track (400m, 800m) and Beach Volleyball (1's team).  I continue to enjoy riding equestrian and assisting our trainer with lessons for the younger riders.