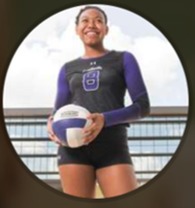 My junior year of school ball was good, and I learned a lot.

My high school team made it to the semi-finals of our state tournament. For the year, I finished with 378 kills – third overall in the conference. I also set a new career single game record with 28 kills on 63 attempts (.286 hitting percentage). I was selected Arkansas Max Preps player of the week for week 9 of the season (10/7-13) when I had 73 kills, with 4.06 k/gm average. In our final match of the season, a 4-setter against conference rivals, I got 21 kills.

At the end of the season, I was selected to the All Conference Team, the All State Tournament Team, and All State Second Team. For my high school career I am just shy of the 1,000 kill mark.

Club season has been great so far. The move to NW Arkansas Juniors Storm last year was amazing and continues to make me grow and achieve more than I had previously.  I love my coach and would do anything for my teammates.  They have truly become a second family.  So far this year we have a record of 38-4 with wins at MLK in Kansas City, Memphis Challenge, LV Classic, and earned a bid at Sushine Qualifier. I have played mostly as a right side and have had the opportunity to play all the way around which has allowed me to develop my passing and defense.

In college I would like to pursue a degree in Anthropology with a concentration in Cultural Anthropology. I also love History and performing arts – specifically, musical theater.  I would love to be able to go to a school where I can pursue all of my interests in some way.

I would love to go to a school that values my contributions and wants to compete at a high level and also has a genuine concern for players as people.  I want to grow, contribute, and be a part of a team that wants to accomplish great things together.

I am a goofy, kind, intelligent, inquisitive, assertive, competitive, and generous person.  I am looking forward to attending a school that would appreciate everything I have to bring to the table.