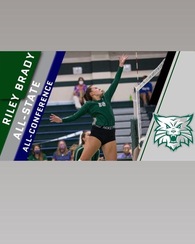 Hi!  I'm Riley Brady and I'm a junior at Episcopal Collegiate in Little Rock, Arkansas. I am a multi-sport athlete.  I used to think I would play basketball in college but after spending a season with my club volleyball team, I have decided to pursue my dream of playing college volleyball!

My freshman year, I was a starter and played all 6 rotations.  When on the front row, I was primarily an outside.  We won the 3A State Tournament my freshman year!  As a sophomore, I was asked to take over as a setter, while still hitting.  Our team ran a 6-2 and, when not setting, I hit from all three front row positions.

I tried out for and was selected for the Elite Volleyball Academy (EVA) 16 National team.  Since I was joining a team of other elite players, I was asked to fill a needed role as a middle for my club team.  While not the tallest middle out there, I believe my competitiveness and athleticism have helped me become a quality middle!  We earned a bid to USAV Nationals, where i had to move to OH due to a teammate's injury.  Now, I'm back with my high school team in our traditional 6-2 offense.

The thing that I feel sets me apart on the court is NO ONE will ever outwork me.  My coaches constantly talk about my motor...I believe that, even if you have an off night, you can always bring your effort!  I always want to be the player people remember because I played the hardest and was a leader on the court.

I try to always be "coachable" and receptive to criticism.  Being a part of team and a good teammate is so important to me.  I believe being a good teammate means being a leader AND a follower, encouraging teammates but also holding each other accountable both on and off the court.

In addition to volleyball, I also play basketball and made all-conference and all-state my first two high school seasons.  This past year, I was selected to the All-Arkansas Prep Underclassman Team.  I also play soccer for my school.   Scholastically, I maintain a 4.1 GPA at one of the most academically challenging schools in Arkansas.  I believe playing sports actually makes me a better student because I have had to learn to manage my time wisely and make good decisions off the court regarding time management.

My goal is to play collegiate volleyball.  Whatever time and sacrifice I have to put in to achieve that goal, I am willing to do.  I appreciate any coaches that take the time to view my profile and I look forward to communicating with coaches about opportunities at their schools.  I am unsure of my major at the moment.