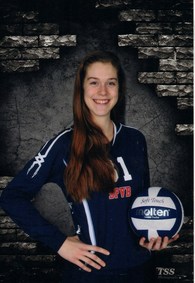 As a 6’3”, 6 rotation player, I have been training in the College Prep division of the Sports Performance Volleyball Club in Aurora, Illinois.

In 2011 I was first selected to play on the Elite 14 team, in 2012 season with the 15 Elite Frosh squad and in 2013 with the 16 Elite team.. This intensive training and competition club has improved my abilities and provided me with the opportunity to travel to major tournaments in the United States, from Houston, to Ohio, Louisville, Nashville and Orlando, along with the highly competitive SPVB Power League season long schedule.

In the fall of 2012, I began my second year competing on the Hinsdale Central High School Varsity. My HS team had a great State playoffs run, making the Elite 8 Super Sectionals Final in the IHSA class 4A. My play will continue to improve as I am training daily with more experienced teammates who will continue their careers at Division I universities.

During the 2012 club season, I was selected as team captain for my Sports Performance squad, so that has allowed me to learn more leadership skills. With my height, leaping ability, leadership and desire to continually improve in my play, I want to play at the college level. At the AAU Nationals in Orlando last June (2012), my team finished tied for 5th out of 174 teams. We played exceptionally well as a team and I was only 1 of 14 players selected to the AAU All Tournament Team in my 15 division. This is an honor that reflects upon my teammates.

Most recently, the 16 Elite team competed in the June 2013 AAU Nationals in Orlando.  My team finished T-5 out of 90 teams in the Open Division.  (I have posted tournament stats on my NCSA profile)

I have been involved with a number of college level training camps as an individual, with team camps at my high school, along with individual training at the SPV club. I enjoy playing (and learning) at a high level, against older competition. As I move into my junior year at Hinsdale Central High School, I have become more focused on my volleyball improvement, along with the importance of my school work. I work hard at my studies, especially with the time management that's needed in the demanding schedules of both high school and club play.

I remain an active member of my church high school youth group, eager to be successful in my high school studies and supporting the entire Hinsdale Central High School community.

Volleyball is my passion!