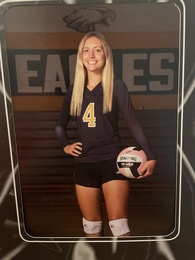 I started playing volleyball at a relatively young age. There was an AAU team that needed another member, so I was like “hey, why not”. Little did I know that I was two years younger than these girls. Being in second grade, I knew very little about volleyball and I just thought “I should try this new thing out”. I was definitely the worst player on that team, but that didn’t matter to me. All I wanted to do was meet new people from a range of schools. That team taught me that “branching out” will only make me more successful. This led me to trying out for my first club team three years later, and now here I am.

After five years of club experience, I feel that I'm an overall better person/player because of it. The sport of volleyball has helped me learn and use leadership skills on and off the court. Also, over these seven years total of playing, I've developed a very high volleyball IQ, and I’ve learned to be a smarter player in a variety of different situations. I have an immense passion for everything involved with volleyball, and it never gets old to me. I love playing with a variety of different people, and adjusting/communicating with different setters.

Like volleyball, I strive to be successful in all the things I do. Academics is very important to me, and I love to apply everything I learn to the real world. While balancing school and volleyball, I’m also involved in basketball, softball, track, speech, and FCA. Being busy has taught me many things including time-management skills, communicating with people, and having grit and determination for all things that I want. These are all things that will not only be important at the collegiate level, but they will be used for the rest of my life.

Some characteristics that describe me include being trustworthy, coachable, and open to all challenges. My high school coach this year had the trust to start me on varsity as a freshman, being a middle blocker/hitter. This year we were very successful, and we had an over .500 season, which we haven't had in three years. I’m also very coachable and I can adapt to constructive criticism. Finally, I’m the person that does whatever is best for the team. I understand that volleyball isn't an individual sport, so I put myself in the position to make the team more successful, not just me.

I love overcoming challenges in all scenarios of life, and I’m a huge competitor. I’m also a very determined player that strives for high goals, and I don’t stop reaching for those goals until they are completed. I never would’ve seen myself as an outside after being a middle the last five years, but my club coach saw something in me that I didn't initially see. In the beginning I thought “wow, I don't know if I can adjust to this”, but I worked very hard all season and now I see myself playing anywhere as a hitter. Being a versatile player has been something I strived for, and now that I’m there, I'm more confident with my play. Knowing that I’m a versatile player, I can play any position and I know that I'll be successful in all situations.

Playing at the next level has been something I’ve always strived for, and I will work hard to make it happen. I believe I will be an amazing fit for your team because I’m a very flexible player that has an immense passion for learning, growing, and “branching out” not only as a player, but also a person.