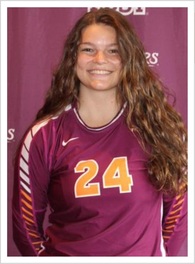 My dad was a P.E. teacher and coach so I spent a lot of time around a sports team environment, watching as he coached his players. I really liked how they worked as a team and improved. Because of those experiences, I knew I had to get into sports. Volleyball is the sport that fits my natural abilities and that I am drawn to the most, which has made me want to try my hardest to see how far I can go and how much I can accomplish.

Playing volleyball, I've learned that I'm a pretty tough chick. There are a lot of hits and bruises, both physically and mentally, but I've learned that when it gets tough and my coach is tough on me, it’s not personal and they want to help me improve. I have to be mentally tough and ready. I've also learned there are people who will say I can't, and when I hear that, it just makes me try harder to prove them wrong.

My goal for high school is to do my best both academically and athletically. In college, I'm interested in continuing my volleyball career, while studying  athletic training, communications, or criminal justice. In the future, I'd also like to be a volleyball coach.

Lastly, I'm a coachable player who is recognized for my good sportsmanship. At one of my high school basketball games last season, my team won, but it was a tough game. After the game, one of the referees approached me, shook my hand, and told me that if he could give an award for good sportsmanship, he would give it to me because he noticed I was well mannered, a good athlete, and had a good attitude throughout the game even when I got frustrated.

Yes. American Government - We The People