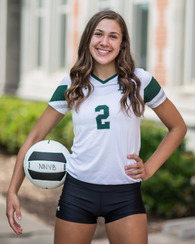 Athletic and academic excellence, along with character and hard work, are core values in my family. I have three older brothers, one younger brother, and no sisters. My two oldest brothers both earned full Division I football scholarships. My oldest brother, John, was a backup quarterback at Oklahoma State and also Iowa State. My brother Charlie is currently an All-American tight end at Iowa State and was named to the First Team Academic All-American team this year. My next brother, Sam, is a freshman in college and was a National Merit Semifinalist, who is attending college on a full academic scholarship at Arkansas. I plan to follow their lead but to chart my own path of athletic and academic success.

In my family, we all played lots of different sports when we were young. I played soccer, basketball, softball, and track and even tried gymnastics. As I got older I focused mainly on soccer and basketball, and I didn’t start playing volleyball until I was in sixth grade. (This seems strange looking back because my mom loves volleyball, was a high school state champ, and even played on the volleyball team at the University of Notre Dame for a year.) Ever since I tried it, I loved the intensity, the excitement, and the teamwork of volleyball, and I play with passion, energy, and joy. I’m on a great club team with a fantastic coach this year (Oklahoma Charge 16UA), and I am so excited for this season.

My goal is to play college volleyball at the highest level possible. Another goal of mine is to maintain a 4.0 GPA in high school. I am very long, I have large “setter hands,” and I’m left-handed. I’m also quite ambidextrous, which gives me a lot of options both as a setter and a hitter. I believe that earning a volleyball scholarship is a realistic goal for me because of my athleticism, potential, work ethic, character, and determination. I am very smart and very coachable, and the bigger the moment or the opponent, the better I play. I may be the only daughter in our family, but I think I’m the toughest. My brother Charlie (who will probably end up in the NFL) once told a reporter that I was the best athlete in the family. That meant a lot to me, and I intend to prove him right!