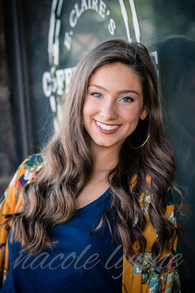 My goal is to play volleyball at the collegiate level.

I have grown tremendously the past 3 years as a student athlete.

My freshman year I was the first freshman at Anderson County High School  ever to start as a outside hitter.  We ended the season winning District, 2nd in Regionals and lost a heart breaking 5 set game  at sub-state.

As club season came I ended up as Middle blocker. Back to high school I played as a 6 position at Opposite then as the season progressed, best for the team was to move me back to Outside.

Again, as club came I needed to play middle.  I was so excited to get back to high school and play Outside. That didn’t work out as best for the team was to play Middle.  As frustrated as I became In the beginning, I didn’t realize how this was developing me as a player.  I realized I can now play all 3 positions!  I decided just to be the best middle I can possibly be to get us to the State Tournament.

With no seniors on the team we went to TSSAA State championships and placed 4th in a heart breaking 5th set. We are so excited to see what we can accomplish this year!

As awards came I ended up with “The intimidator” award and “Big Game player”. The reason for the big game was as pressure was on to perform, I didn’t buckle.  I stepped up and played like I had never played before while others were intimidated and tipped the ball over and over,  I just played the game.  I feel that is so important when the win is on the line.

What sets me a part from other players is I have always had “Nerves of  Steel”. When I play the game I’m focused and determined as ever. I try to stay relaxed and joke around to loosen the team but on the court GAME ON!