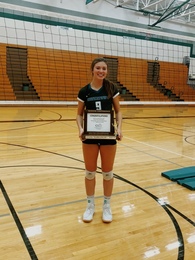 Ever since I was a little girl I had loved playing sports, however volleyball was always my absolute favorite. Volleyball was not the first sport I had started to play, but I seemed to pick up how to play volleyball well, very quickly. Some other sports I have played are soccer, softball, basketball, and track and field. In high school I decided to play volleyball in the fall, club volleyball during the winter and spring, and track and field during the spring. I never really wanted to join track and field, but I thought that if I joined it would possibly help me with training for volleyball and making me a better volleyball player. It turned out that I was very successful with track and field making varsity right away as a freshmen sprinter.     Anyhow, volleyball was still my favorite sport. Freshmen year for volleyball I tried out for our freshman team and made it becoming a middle hitter and one of our setters. I had never set before or played middle so I was a little nervous. For the four years before high school volleyball I had always played an outside hitter playing all the way around. Even though I wasn't an outside anymore I still liked playing middle and being a setter because I got alot of playing time. The same year for club I tried out for River City Volleyball Club and I also played middle and a setter. Then, as a sophomore I tried out for the JV team for high school. I made the team as a middle and as you can probably guess a setter too. I was a little disappointed from not making the Varsity team as a sophomore because I thought I was ready to play at the level, but the Varsity coaches talked to me thinking it was best for me to stay on JV, but move up to Varsity if they ever need me for a game or later during their season. They thought it would be best for me to play more too, which I completely understood. After JV season ended, I did go up to Varsity playing with them. After high school season ended I then went to try out again for River City Volleyball Club, but their national team. I made it with becoming a middle hitter. During this season of club I worked so hard to improve as a player always trying to become better, and it showed throughout my playing.

Not only do I work hard in sports, but I work hard at school with academics and at home too. Being a sibling of five kids in my family as been a joy of fun, but also a lot of intense work. For example my older brother  has autism, so each day brings its struggles and challenges, however I just work through it to become a better person. Even babysitting my siblings can be a struggle, but I learn to overcome it and to work harder. At school, academics to me are very, very crucial. I think they're just as important as sports if not more important. I am an A student who takes harder classes to challenge myself to become an overall smarter individual.

I would make an amazing candidate for your team because I am a person who is always going to work hard to become a better player.  For example, not only do I work hard at practice to become better, but I also work on volleyball at home doing volleyball workouts, jump boxes, and going for runs. I do these extra things because I am a motivated person who is always going to try and become better. I am also a team player who wants everyone to succeed and have fun. I would always bring a good attitude to your team trusting you to make me become a better player.

My main goal with volleyball is to become the best player I can possibly be. It is my dream to be recruited somewhere to play volleyball for their team. I am wishing to get athletic or academic scholarships to help me get to where I want to go as well. When I go to college I want to find the right career path for myself and achieve it in the best way I possibly can. Hopefully somebody reading this will help me to achieve these goals of mine. Thank you so much for your time with reading my personal statement.

Yes. I have taken four honors classes so far at the high school.

Yes. I’m currently taking an AP class this year as well as another class that is a dual credit class. Next year I will be taking two more AP classes as a senior.