College Coach? Click here to view all of Elisa's information. 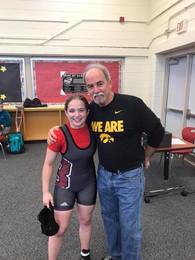 The first time I heard of wrestling was the night of my freshman open house. At the time, I was a completely different person, as in constantly anxious, easily discouraged, and scared that I would not go anywhere in life. I had been crying only a few minutes prior when I first met my coach, and I did not seem like a likely candidate for wrestling. A few months later into my freshman year, I showed up for the first pre-season practice. I had grown up training in Traditional Taekwondo since the age of 5, but coming out for wrestling threw me entirely out of my element. I was the only girl in a room full of huge, muscular and intimidating guys. Over time, they would become like brothers to me, but at that moment, looking into the weightlifting room, I was absolutely terrified.

If I had not stayed that day, I would have never found anything as great as the experiences that wrestling has given me. Throughout the past few years, I have found myself through this sport. I have developed tremendously as a person, going from crying at practices freshman year to becoming one of the captains by the next year. My first two seasons I was training in both wrestling and Taekwondo, leaving from one practice to the next every day. As of recently, I have set 10 years of Taekwondo aside in order to pursue and focus on my dreams of competing in collegiate wrestling. Being the only girl on the team, as well as the first girl to complete not only one season of Butler Wrestling, but multiple, I have found a passion for advocating for women’s wrestling. My senior exit project is written on the benefits of sanctioning wrestling to grow the sport for women.

Wrestling did not change who I was, but instead, gave me the ability to bring into light the person that had always been there underneath. I dream of competing in collegiate wrestling, and giving back to the sport later through coaching, specifically to young girls who can grow through wrestling, similar to how I did.