College Coach? Click here to view all of Adam's information. 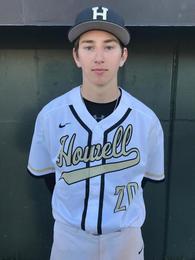 My name is Adam Mrakitsch.  I live in Howell, Michigan and attend Howell High School.  I am a 2021 graduate.  I live with my parents, Steve and Cheryl, and have an older sister, Jacklyn, who is attending Lansing Community College.  I am interested in playing baseball at the collegiate level.  I qualify for the National Honor Society at Howell High School.  My current grade point average is 3.86.  I am undecided as a major to pursue in college, but leaning towards a business degree.

I am 6'’1 and weigh approximately 160 lbs and still growing.  I am a left handed pitcher that also plays outfield.  I bat right handed.

My travel team in 2018 was the Lincoln Park Rails and in 2019, I will be on the Diamondbacks Elite (same team/coach), where our highlight was making the semifinals at Vanderbilt (out of 96 teams registered).  I made the all tournament team at the Vanderbilt tournament.  I was clocked as high as 86 mph at a tournament hosted at the University of Michigan.  I have also participated at showcases with PBR in 2017 and 2018.

My sophomore high school baseball season has completed. I was on the varsity team as a sophomore and was one of the starting pitchers. I also started in the outfield when I did not pitch. I started every game this season and hit towards the top (if not the top of the order). I have had a few newspaper articles written about me this season. My best highlight is probably when the State Champs Network (shown on Fox Sports Detroit) profiled one of our games in which I was the starting pitcher. I pitched a 1 hit shutout/complete game for the win. I was then interviewed after.  I made all Conference and 2nd team all County/Region as a sophomore.

Lastly, I have posted a pitching video in the this Spring, 2019.  I have also registered with the NCAA.

My travel baseball season for 2019 has completed.  Our record was 22-7.  I just uploaded the stats from Gamechanger.  Our highlight was winning the Tidal Wave tournament at Ripken.  I also pitched the championship game and was awarded the MVP.

Yes. Honors Geometry as a freshman As a sophomore, I am taking Honors Algebra 2 and Honors English