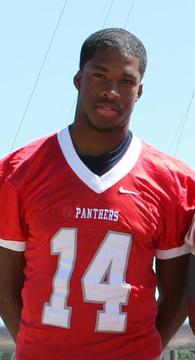 Football has become a core part of my life and serves as my motivation to keep pressing on through all that I encounter. I currently attend the Academy for Urban Leadership Charter High School and play football for Perth Amboy High School. I am a top scholar and am currently enrolled in Advanced Placement and college courses at my school. To date, I have received the Scholar-Athlete award for excellence in both school and sports, I am a National Honor Society inductee and member, and have received 1st and 2nd Honor Roll consecutively throughout all 4 years of high school. My cumulative GPA as of current is a 3.2.

My versatility has allowed me to serve as an asset to my team. My teammates would describe me as a player who is always enthusiastic to play any position that will help to better my team. As a Varsity athlete, I have played Quarter Back, Wide Receiver, Free Safety, Corner Back, and Special Teams. My football accomplishments Third-Team Home News Tribune All-Area Football Team (Offense) [2014], Greater Middlesex Conference All-Division Football Team [2014], Greater Middlesex Conference Top 100 Football player Selectee [2014], The Star-Ledger/NJ.com Week 11 “Football Heroes” Rushing Leader [2014], Heart of a Giant Award Week 5 Winner and Finalist [2014], MaxPreps Varsity Football Overall Player of the Game (Nov. 13 @ Milburn HS) [2014] , NFL’s National 7-on-7 High School Tournament Participant [2013], High School Player Development (H.S.P.D) Leadership Program Selectee [2014], Varsity Team Captain [2013-2014] and Rookie of the year [2012]. As a member of other athletic groups, my accomplishments include Track and Field Captain [2014], Track and Field Varsity Point Award Champion [2013], Penn Relays Participant [2013-2014], Track and Field Decathlon athlete [2011-present], Most Improved Award (Swim Team) [2014], and Wrestler for the Academy for Urban Leadership Charter High School Wrestling team [2014-2015].

I enjoy getting involved with the community, whether it is in my own home town or beyond. In 2014, I volunteered for a health awareness event in NYC, Huddle for Health, sponsored by the Rogosin Institute and Living Heart Foundation in partnership with the NFL. During this event, I assisted medical personnel in raising awareness about health issues and tackling chronic diseases. Within my school, team, and community, I also participated in the H.S.P.D Leadership Program Food Bank [2014], Flynn Elementary School “Math Night” [2014], Hurricane Sandy Clean-up of the Perth Amboy Waterfront [2012], and helped to feed the needy in the Perth Amboy Soup Kitchen [2012].

My collegiate goals and aspirations are to become a humanitarian with a great career that carries an astounding leadership role. My particular interests are physical training, athletic training, and history. I hope to use each one of my interests to mold my future.