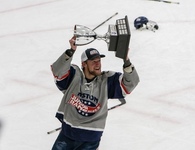 Being selected to the USA Hockey U15 National Player Development Team in July 2017 has been the highlight of my hockey career.

My experience at the National Player Development Camp helped me grow as a person and lead me to re-focus my own efforts on hard work, commitment, sacrifice and teamwork and what is required to play at the college level.

My goal after playing major / junior hockey is to play college hockey while obtaining a degree in Business or Engineering.

On the ice or in the classroom I’m at my best when I’m faced with a challenge or put in a competitive situation.  I want to be on the ice when the game is on the line.

I am an offensive defenseman in which I use my speed to create scoring opportunities while playing aggressive defense in front of my net. I feel I can make a difference on the ice and I'm willing to test myself against the best players in order to win.

I have the athletic and academic skills, combined with the leadership abilities, to make an immediate impact at your program.  I truly believe I can take on any challenge and look forward to competing at the highest level, that's when I'm at my best

OTHER HONORS AND ACHIEVMENTS
– Vice President Student Council, 2016 / 2017
– School Honor Roll each of the past three years
– Recipient of the Holy Trinity “Excellence in Service Award”
– Member of Decathlon Team, 10th place in Math
– Recipient of the Monsignor Gallagher – “Outstanding Student Athlete” Award, 2017