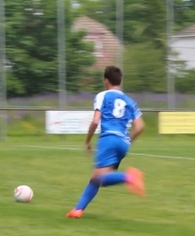 I’m Oscar Andsjö, I’m Swedish and Uruguayan, and I was born in Stockholm, Sweden on the 15th of July 2003. I live in Switzerland and I will be graduating from high school in 2021. I have been playing football (soccer) for as long as I can remember, and it’s become such an integral part of my life that’s defined me both on and off the pitch to the point where I can’t even begin to imagine living without it.

I speak Swedish, English, Spanish, and French, and I’m currently in the first year of the IB diploma program where I am taking rigorous courses and excelling in them (my classes are HL Math, HL Physics, HL Spanish, HL Economics, SL Chemistry, and SL English Lang & Lit). I am enjoying all my classes and I’m hoping to major in aerospace engineering or astrophysics in college/university.

I play as a left midfielder and as a central midfielder (mostly defensive), but I have played a few games as a left back this season. I am a starter for both my club and my school’s varsity team and a wear the number 8 jersey. I am light hearted but always concentrated on giving it 100% on the pitch, I am competitive however I’m very much a team player. I am left footed, I’m fast as well as a good dribbler and passer. I put in a lot of defensive work (more when I play as a CM than as a LM) with tackles to break up counter attacks, and good marking for when the other team is on the offence. I’m calm on the ball and have accurate passes and crosses as well.

I started playing for a soccer team at the age of 7, and if I’m going to be honest, I was really quite bad, but I loved the sport too much to even consider giving up on it so I started spending my free time playing soccer with my dad and going to soccer camps almost every summer. That hunger to keep on improving is something that has stuck with me to this day. To keep improving and challenging myself as much as possible, I’ve always stuck with one guideline: that I’ll only ever become a better footballer by surrounding myself with players that are better than I am. This has guided me to join teams where I’ve been able to learn from both the players as well as the coach, and furthermore it has kept me determined and focused on my football to achieve my goals of eventually surpassing those players.

The reason I want to go to college in the US is because I want to be able to continue playing soccer at a high level and alongside my studies. This is unfortunately something European universities do not offer. Contrary to what one would believe, dedicating myself to playing soccer with my club 4 times a week (3 practices and 1 match) has greatly contributed to my academics. Soccer has never inhibited my academics, the time I’ve spent playing soccer during my practices and games has allowed me to clear my mind from any stress from school, and has also energized me mentally which has led to me not feeling as worn out from school. As a result, my dedication to continue playing soccer has resulted in me being more energised and less stressed when approaching my academic work.