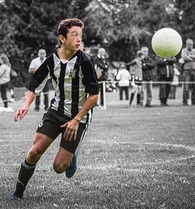 I have been playing soccer in a club since the age of five, and have always been in the school soccer team everywhere I go.  Becoming a professional has always and will always be a dream of mine. Recently, I realized that I wanted to keep on studying while doing what I love most at the same time; playing soccer. Being a student-athlete gives me this opportunity. I am a dedicated and driven student, athlete and person. I am passionate and I always put in 100% effort in everything I do. I am perseverant and will work unceasingly in order to attain my goal of playing soccer at a collegiate level.

I speak English, French, and Spanish fluently and have been learning German for 5 years.  I enjoy all classes I take, and perform very well in them, but Economics and Business-related topics interest me the most.

I have strong values and ideals; my top ones being respect and hard work. This year I was interviewed and chosen to be a leader for Kairos, a Catholic retreat for teenagers preparing for their confirmation. I have been preparing for this since the beginning of 2019 and successfully gave a 20 minute talk on "Ideals" this October; I also had to lead a small group in class discussions throughout the retreat and comment on what the retreat consisted of in front of over 100 people. This, alongside being a soccer coach for younger kids and forming part of the school's Model United Nations shows that I am responsible, confident, and a leader.

I love exercising and working out; I aspire to be the best I can be and always look to improve. I also play tennis and enjoy track and field. I have been in the school tennis team for three years and played for a club for four years.

I am very competitive and always want to win, but I am a great team player. I enjoy playing most as a Forward, and as an Attacking Midfielder, but the Winger/Outside Midfielder positions also suit me. I am a starter for both my school team and my club and my coaches put me in all the positions previously mentioned. I am a very technical and agile player, I am fast and very precise with my passes and shots. I display leadership during games on and off the field and I have captained my teams several times.

I have experience playing in England, Switzerland, France, Mexico and Spain.

The three years I was in England I played for a club called Abbey Rangers FC, my school's JV and Varsity team, and the U16 Chelsea pre-academy. In Switzerland I play for FC Versoix, and have played for my school's JV team, and currently the school's Varsity team. I have participated in soccer camps in Mexico and I trained with a Professional Second Division side called A.D. Alcorcón in Spain. As my club is located near the border between France and Switzerland, we often play French teams too.

I live in France but go to school and have all my activities in Switzerland; this is very common in the area which I live in.