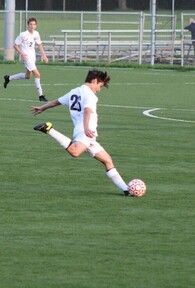 Hello, my name is Connor Kraus and I am an attacking outside back in the class of 2023.  My main goal is to play four years of college soccer on a competitive team, while also receiving a top notch education.

I play club for SC Wave Juniors 05 Boys in Waukesha, WI. SC Wave competes in three top tier leagues: Club vs. Club MRL, National League P.R.O and Select Clubs National Showcase League (SCNSL).  We will be playing for the USYS National Championship in July, 2022,  in Orlando. We will be joining MLS NEXT in Fall of 2022.

I attend and play varsity soccer at Marquette University High School in Milwaukee, Wisconsin. Marquette is known for its rigorous, college prep academics and top sports programs. Marquette just received the honor of being named a 2021 National Blue Ribbon School, the highest honor given by the US Dept. of Education.  Marquette was only 1 of 23 private schools recognized nationwide, as well as the only Wisconsin high school.  I have made honor role for all 5 semesters that I've completed at Marquette.

My Marquette High School varsity team ended the Fall 2021 season by winning the D1 Wisconsin State Championship, as well as being ranked #3 in the nation by unitedsoccercoaches.org.  Despite our tough schedule with playing nationally ranked out-of-state teams, we ended with a record of 23-1-1. Although playing behind a senior starter this season, I found nearly equal playing time and helped our defense give up only 10 goals all season, with no goals given up during our state run to winning the state championship.

Another one of my soccer achievements is starting on Wisconsin's ODP state team for four years and making it to the regional pool in 2021.  I enjoyed playing with and against the best players in the region and learning from the many different ODP coaches who have helped me grow as a player.

I'm a good candidate for your team because I am a leader, determined to  win, and a great communicator.  I keep my head up and maintain a positive attitude when things aren't going our way, and would rather turn the game around rather than blame others. One of my biggest strengths is my mental game, and I use my abilities of anticipation, decision making, and overall soccer IQ to my advantage. I am an accurate short and long ball passer and enjoy attacking on offense to help my team.