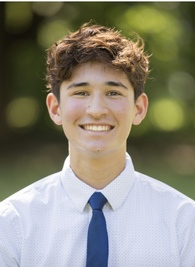 I am Ethan Hallick, and I want to play volleyball at the highest level possible, while still having a high level of academics. My interest in volleyball began in my eighth grade PE class, the part that appealed to me was the teamwork aspect of volleyball. In volleyball, no one player can carry the team. A team needs passers who can get the ball to the setter, the setter to get the ball to the hitter, and the hitter to get the kill. This sense of teamwork led me to try out for my first team, Madison Elite. I made the 14s team, and, as the tallest player, my coach decided that I would make a great middle. Even though I am left handed, I played right handed. My love for volleyball led me to putting all my focus into the sport, dropping ski team, karate, and basketball to do so. I wanted to learn and play every aspect of the sport. So that summer, I attended as many boys volleyball camps in Illinois and Wisconsin. After my first college-run camp, I realized that, physically, I just wasn’t a middle. So, I decided to take a different angle. I spent the summer training myself to set and switched my dominant hand from right to left. I was new to setting but was fortunate to continue  working with my position coach, former Olympic setter and gold medalist, Rod Wilde, and attend many camps over that summer allowed me to build my skills.

I chose Madison Country Day School, a high school that offered the IB program, which has a more well rounded education, at the expense of not playing on a high school team. The best way to get touches and stay active in volleyball was to manage the girl’s volleyball team. This led me to understand more complex plays and get as many touches as I could, despite not having a team. Club tryouts were rapidly approaching, and I was nervous because everyone else had high school teams to play on. During a tune-up clinic run by my old coaches, they were excited by my transformation as a player. My off season and managing had paid off. I made the 16s team, playing up a year in age group for Madison Elite. After the season, I went straight into my summer schedule, attending many volleyball camps, including invites to USAV Indoor A3 and USAV Beach A2, and playing as much as I could. Many local coaches got to see me play and my passion for volleyball which led to my school forming a co-op.

Edgewood, the school that we co-oped with, was a second-year program that had not yet won a game. In Wisconsin, men’s volleyball is so small that there is only one division, meaning a small D2 high school like Edgewood to compete against the much larger public D1 schools. Going into the second year, the varsity team brought me in as starting setter-  we went 10-17, placed fifth in the conference, and I earned honorable mention in my conference. I had fun working out with my new teammates and was happy to be able to play. I also work out at a program run by UW Health to improve my game by gaining more strength, explosiveness, speed, and agility.

This year I also decided that I would make the journey over to Milwaukee, which is an hour and a half drive, to play on a nationally competitive team. When I attended a few different Milwaukee camps, I realized that Milwaukee was a different beast. Milwaukee has a more developed volleyball culture, which allowed them to have national teams. I tried out for MVC (Milwaukee Volleyball Club) and made the top 16s team. This club made me realize just how far I would have to go to be able to compete at a college or professional level. Our team got a bid early on for BJNC, started working on complicated plays, and were excited to compete, but then COVID-19 struck. All of the hard work we had put in shooting towards nationals was all put on hold and eventually canceled.

Despite COVID-19, I am getting many touches, practicing setting in my room or setting up a grass net to work on developing my jump top-spin serve. Once the state allowed, I got back in a gym and have started practicing with teammates again to make the Edgewood team the best it can be this upcoming year. I also participated in an AVP America tournament and got a bid to go to the AVP America Nationals. I’m still working with my position coach to bring my setting to an even higher level than before. All of the things I do for volleyball may seem like work to someone else, but for me I just want to keep playing as much as I can. My goal is to continue to play volleyball while still going to an academically rigorous college.