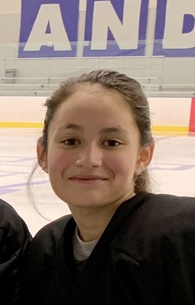 Playing competitive hockey has been a central part of my life for as long as I can remember.   I just concluded my junior year of my varsity high school season which concluded with a loss in the Division 1 State Tournament quarterfinals to the eventual champions, Austin Prep.   It’s the furthest the HPNA program has ever progressed in the state tournament.   I’m proud of the team’s accomplishments and my leadership role in both on ice productivity (12 G, 10 A) and team culture.  I’m now preparing for an effective  off season training regimen, achieving Level II referee certification,  a productive club season, and senior year of varsity hockey where I aspire to be one of the captains.  Looking forward, I hope to  have opportunities to continue my playing career in college.

In addition to HPNA’s successful season, I also led my NS Wings U-16 club team to a Massachusetts States semi-final appearance following an ESGHL Championship where I had 6 goals and 3 assists during the tournament.  Last year, I was named to the First Team All Merrimack Valley Conference as a sophomore.  And beyond successful team events, I’ve also participated in highly competitive individual events including the 2019 Massachusetts Girls CCM High Performance Festival and 2021 Hockey Night in Boston Showcase.

Looking forward to next season, I hope to build on my success as a play-making forward that can drive a line from any of the forward positions.  I take pride in being responsible in all three zones and playing in all special teams situations.  Going forward, I’m looking to improve my goal scoring abilities and growing my leadership character and roles.

Beyond the wins and losses, I see hockey as a community. I’ve met and participated in skills led by Kacey Bellamy and Amanda Pelkey.  While I admire the Women’s US Olympic team’s on ice accomplishments, I’m inspired by their willingness to risk their lifelong Olympic dream to stand up for equal pay.

And in my hometown, I’ve seen friends and coaches turn a personal family tragedy into an opportunity to increase mitochondrial disease awareness and raise scholarship money through the annual Matthew Harty Mito Classic street hockey tournament.  Hockey is a community of very different people that share one common love between them all, and that is the game of hockey, which brings them all together to do great things.

This strong sense of culture is what drives me to play hockey.  I see at as a life long experience and see myself as a referee and/or coach when my playing career concludes.  In the meantime, I look forward to a strong finish to my high school career this year and understanding what opportunities may exist for me at the college level.