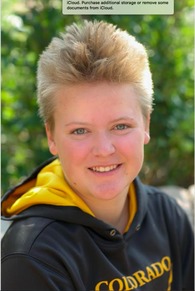 Dude, I am literally just a kid looking to go to college and loves a sport enough to want to continue painful and rigorous training for another four years. "What makes me different from other recruits?" Anything I say will have been said by anyone else, like come on, there are so many other athletes with better 2ks and less cynical attitudes. "My name is Megan Bach, I'm 16 and just LOOOVE team work!" winky face " I am an enthusiastic person with a positive attitude towards learning and becoming a better athlete!" Well sure, I might of tested well, but my friend had a panic attack in the middle of the ACT and got a near perfect score and my other friend accidentally took too much of his ADHD medication and started playing enie-menie-minie-mo with the bubble sheet and everyone could hear him. Yay for me, I fill out bubbles well. Whoop-de-do. Positive attitude my ass.

In all seriousness, I like to draw comic strips. Not comic books, the funnies. Like The Far Side, by Gary Larson. He has some good rowing ones. "Excuse Me sir. I think I'm getting a blister". Like no shit dude, some days I can barely type because of all the tape (although I do get the least amount of blisters on my team, usually only when I switch sides or when the weather conditions make me question my coaches sanity). I usually try and stay away from the political stuff because its funny for like 5 minutes then it becomes a really depressing narrative on the state of our world.

No I do not want to go to art school, I am not that good. "Oh is that a person, I thought it was a funky dog"- A third friend( yea I know I have three friends. WOW a student athlete with OK grades and a social life? hashtag WTF, hashtag GOALZ)(what the H-E-double hockey sticks is a hashtag anyway? WHAT IS POP CULTURE? Why won't anyone just let me listen to my Oingo -Boingo CD in peace?!)

What do I want to study, you ask. Well I am real interested in forestry. I WANT TO MAJOR IN TREES! I like trees, trees are cool. Sometimes when life is stressful I just walk out into my backyard and sit in the forest. In case your confused, I live in the mountains, according to some crazy guy on the fire department some were in the vast forest space between my house and Rocky Mountain National Park there lives a crazy hermit. When I was little I wanted to become the hermit, dread pirate Roberts style.  But I think that would make me a "disappointment" which means my little sister would with the holier that thou game, and we cant let that happen. When I was in first grade I ran full speed strait into a tree, knocked out my two front teeth, and lay unconchous on the ground for enough time that you would-ve thought we were unsupervised. In 7th grade I went to a big city for the first time with school(San-Fransisco), didn't sleep for two days, then fell over on the sidewalk and started crying about domesticated trees; because all the trees on the side of the road had little cages around them and were planted in perfect rows. On a backpacking trip with school my sophomore year I did a 24 hour solo, during which I climbed a cliff and threw off a tree branch while simply shouting primal noises into the void that one calls the wilderness. Turns out almost everyone in our small group saw, and heard, me do that. One group-mate's interpretation was that I through off quote "An entire f*cking tree", which I guess was true.  AHHHHH!! I just really heck-in like trees. Treeeeeeeeeeessssss. treees. teehehe.  trees.

Why (profanity) trees? In the grand scheme of things, I want to be a park ranger, a Biologist with a Badge. I want to make sure stupid people don't let their dogs go off leash and pee on trees. I also want to educate people on the epic wonders of trees, conduct search and rescue efforts, stop poachers, and save the world. Ya know, the simple stuff. I want to work outside, in the forest, never ever in a cubicle, I would legit die bro.

Yea, this wasn't really about rowing was it. But if your a legit coach you know that rowing is my ENTIRE life, I wouldn't give it up for anything. I just though you should hear about the other stuff I think about in between practices and food time.

In addition. Its like 1am and I'm not gonna read over whatever I just wrote because I got other shit to do. If theres any cuss words, please don't tell my parents, they didn't let me watch the Disney channel growing up. they said that our cable didn't have that channel, but I think that was a lie.

in summary, Trees, rowing, I kinda suck at rowing, if your a good coach you can make my 2k better so just ignore my score, I guarantee you would find someone better. Also, I would like $, if possible. College is expensive and American currency is printed on cotton, so inherently trees don't pay well.