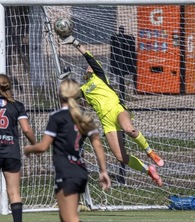 How Would Others Describe Me:

I started playing competitive soccer with St. Louis Scott Gallagher at the age of 6.  Originally, I thought I was a forward.  Overtime, I discovered I loved playing goalkeeper.  At the age of 7, I started training with Brian Jones at St. Louis Goalkeeping. Throughout my early years of soccer, I played on two teams.  One team was with my age group.  On this team, I played in the field to develop my foot skills and to learn the in's and out's of field play.  The other team I played on was a year above my age.  This is where I played goalkeeper.  Playing for an older team allowed me to see stronger, faster, and more difficult plays inside the goal.  At the age of 10, I started to specialize in the area of goalkeeping.  I moved to the Elite Team at Scott Gallagher.  It was during this time I started to work on my technique with goalkeeping: diving, fast breaks, crosses, distribution, and communication on the field.  While continuing training with St. Louis Goalkeeping, I started to attend goalkeeping camps with Tracy Noonan and Dynasty Goalkeeping (North Carolina).  I have continued to work with Tracy on an individual basis a few times a year.  This year, I joined Lou Fusz Soccer Club to participate in the Girls Academy Frontier League.  I am currently a goalkeeper on the Blue Star Academy 06 team.

I attend Visitation Academy for high school.  It is a very strong academic, all girl's school.  I love to challenge myself academically, especially in the areas of science, english, and foreign language: latin.  I have maintained a solid GPA ranging from 3.7-4.0 each semester of middle school.  I am interested in pursuing a scientific field of study in college.

My goal is to attend a strong academic college where I can pursue a scientific major while playing soccer.  The size of the school is not important to me, but I would like to play on a soccer team that is competitive at the division 1 or 2 level.  My preference would be to play for a team where I can contribute in each game.  Ultimately, I would love to continue to work in the sports industry after college: doctor, trainer, physical therapist, or player.