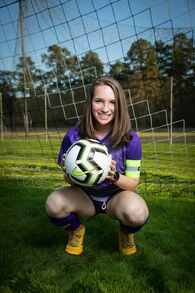 My parents have always firmly believed that as parents your job is to give your child every opportunity you can give them and support them in the final decision. At the age of 4, my parents gave me the opportunity to play recreational soccer. For 3 years I alternated between softball and soccer depending on the season. I finally decided that running up and down a field, chasing a black and white ball in hopes to score was what I wanted to do. Like my parents always said they would, they supported my decision and passions full on. I played fall and spring soccer for another two years and figured out that I wanted more. To give me this, my parents found a select team that was holding tryouts in the near future. I was ecstatic, I got to play soccer year round and continue to develop. A year later I was chosen as team captain, which at the time all I thought it meant was talking to the referee before the game, flipping a coin, and picking a side. This belief was probably one of the most naive thoughts I’ve ever had. At the age of 14, and serving as a captain for the third year, I now know I enjoy being a role model, I love to help others in anyway that I can. Knowing that I contribute to a team in such a monumental way warms my heart. Being captain hasn’t just developed me on the field, or given me another passion, but changed me as a person. I’m very confident off the field, I work to have straight A’s and to be a role model at school. I want people to look at me and say “I want to be like her, I want to strive for her goals of top ten percent, top twenty students, having straight A’s, and so much more.” At the age of 4, with my shaggy bangs and just learning to tie my shoes, I would have never guessed that soccer every Saturday and those orange slices afterwards would have influenced me so much, but I wouldn’t change a thing about it. My parents are truly the people who get the responsibility for it all, between driving me to every practice and game, making sure I had water and the right cleat on the right foot. Waking up earlier to ensure that I woke up in time, finding so many different camps to go to make me better as a player. They’ve really given me great examples of what a leader is, caring, dedicated, loyal, and always in the best interest of their team or in this situation their child. I pride myself on being a versatile player. Along with this, I think my work ethic, dedication, coachability, and leadership skills will aid any team across the nation to win games, tournaments, and titles.