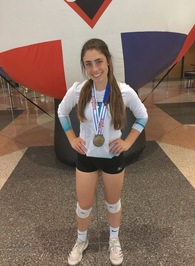 I am interested in playing indoor or beach volleyball at the College level. I am also interested in pursuing a Nursing Degree with aspirations in obtainining a CRNA. I am 16 years old and a Junior at Bishop McLaughlin Catholic High School, Class of 2021. I am a National Honor Society,  Science NHS, Spanish NHS, RHO KAPPA Social Studies NHS, English NHS, and Beta NCS member.  I currently have a 4.16 weighted GPA. I am part of Peer Ministry at my school.

I completed my 5th year of Club Volleyball 2018-2019 Season. I played the Setter position for St. Pete Volleyball Club U16 Teal/Lana Team.  We finished 4th in state of Florida.  We qualified for JOs U16 National Division, which was held in Indianapolis, Indiana.  We competed at Open and USA level.  Some highlights were, winning 2 regional open level tournaments,  finished 5th at the National Triple Crown Inivitational tournament,  finished 4th in USA Division at 2 National Qualifiers,  and finished 5th playing up U17/18 regional tournament.  The prior Season, 2017-2018,  we finished 11th in U15 USA Division at the 2018 USAV Girls National Championship in Detroit.  We won two BIDs to JOs in Detroit by winning 2nd Place in U15 USA at the Mizuno Big South National Qualifier and winning 1st Place in U15 American at the Disney Showcase.  We also won 1st Place in U15 Open at the Gasparilla Tournament in February.  We finished the season with a record of 75 Wins and 6 losses.   The 2016-2017 Club Season, I played for Tampa Elite and was the Setter for the U14 Columbia Team. I was the only new member selected to joined the Tampa Elite U14 Columbia team that year. We finished the 2017 Season Winning the Championship for the U14 American USAV Junior Olympic National Tournament. We won the BID to play at the JOs by winning First Place at the Regional Disney Qualifier. We also finished 3rd in Gold at the AAU Nationals in Orlando. The 2015-2016 Club Season, I played up as the Setter, I was 12y/o, for the U14 Gold Team for Trinity Volleyball Club. I played for Trinity Volleyball Club for two Season.

As a Sophomore transfer to BMCHS, I played the Setter position and assisted my high school team finished with a 30-1 record and finished State Runner Up and won Regional and State Conference for the first time in school history.  My Freshmen year in High School, I had the honor of becoming the Captain of my High School Volleyball Varsity Team.  During my middle school, I played and was Captain of the Volleyball Varsity Middle School Team and also played for the JV High School Volleyball Team. I was invited to play for Crews Lake Middle School during my 7th grade year. I was also invited to participate at the Nationals AAU 2015 Tournament by U13 Tampa Elite Competitive Team, where I played as a Setter. I also attended Nationals AAU 2016 Tournament with the U14 Trinity Gold Team where I played the Setter position.

If you have any further questions or interests about my skill level as an indoor volleyball player, please contact Coach Svetlana Simic ( Coach Lana) at Svetlana-simic@hotmail.com or via phone at (347)414-6757. If you have an opportunity to see me play, please let either my Coach or I know so we could send you a copy of our Club Season Schedule.

Thank you in advance for your interest.