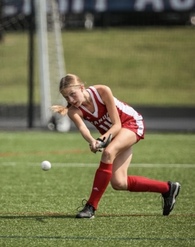 Sixth grade was the first year that I ever played field hockey.  I was at a new school and knew that I needed to make more friends.

The first practice was in July.  No one on the team had even held a stick before.  It was hot and humid and sweat was dripping down my face before we started running laps around the field.  After one time around the field everyone was out of breath. The next day we had practice again and everyone complained that they were all sore and no one wanted to be there because they were so tired and unfit.

We began playing games at the end of summer training. We all wanted to win the first game, but our goalie overheated and we had to forfeit.  There were twelve more scheduled games to prove that we knew how to play. We ended up losing all of them. The other teams not only had more skills, but we realized that they had been playing together since the second or third grade.  No one on my team even scored a goal the entire regular season, but we all stuck with it because we wanted to get better, we were determined to win, and we had become friends.

The first tournament game was our last shot at winning a game that year.  We were ranked last going into the tournament.  We played the number two team in our league and we fought as hard as we could the entire game. When the game went into double overtime, everyone started getting nervous.

At the end of the second overtime, the score was still 0-0, which meant we had to go into flicks.  The other team was prepared to beat us, but our coach prepared us to hit flicks. I was one of five players chosen to do a flick.  We beat the other team because our players made four out of five flicks that night, including me!

What I learned from that experience is that keeping the right mindset is what matters. Who cares if you lose all the games in your regular season!? You keep showing up and putting effort on the field and that's what matters most. The overall growth will be represented at some point and by the end of our season that's what showed. That's the reason I love playing the game. It isn’t all about winning, even though that is fun and exciting. Field hockey, for me, is about developing as a player, a person, and a team.

Coaches have always affirmed me for thinking and playing wisely, building community among my teammates, and showing up to make a difference consistently.  More recently, they affirm me for building my speed with the ball, my versatility, and ball carrying position.

My goal is to play college field hockey at a school  that fits me well athletically and academically.  My plan is to apply what I have learned and to increase my speed and skills as a player in  club and high school field hockey, to build up my teams, and continue to grow as a student and person.